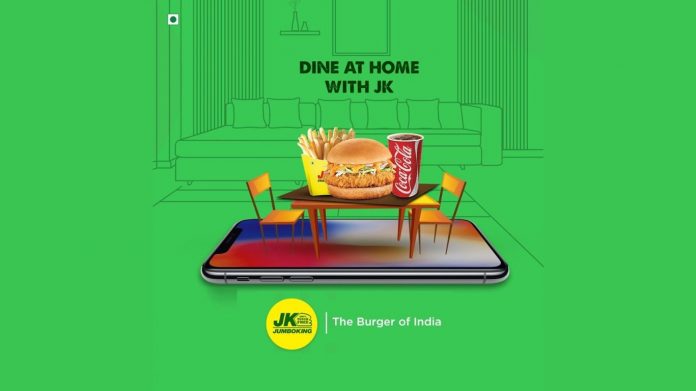 Jumbo king with its new campaign explores what it means to be truly Indian, in keeping with its brand’s desi recognition. Jumbo king, India’s largest chain of native Quick Service Restaurants, has embraced a new tagline- ‘The Burger of India’. Social responsibility is the theme of Jumboking ‘s new social media campaign.

In the course of its two decades journey, Jumbo king’s campaigns have always kept to its promise of maintaining its Indian identity. Being true to its ‘desi style’, Jumboking reflects it’s authenticity on their taglines also. The transition from vada pav to burger, keeping its authentic style, was a major shift for the brand over the last few years.

In keeping with this and its growth into markets outside Maharashtra, the brand has now launched its new campaign which makes it differentiated and unique, ‘The Burger of India’. “The Burger of India’ campaign honors the factuality that we are of Indian origin, Indian bred brand,” says Dheeraj Gupta, the founder of Jumboking. “We are native, outspoken about being local and proud to be Indian.”

During the lockdown episodes of COVID-19, while the brand’s stores were shut, Jumboking being a responsible brand engages itself with the society in a meaningful manner, it wants to stand with the people during this difficult phase.

The brand was established in 2001 with its roots in Mumbai. The company was inspired by the nutriment business model of McDonald’s and Burger King. Though it was inspired by Western dishes, Jumboking sticks to its desi origin. Jumbo king is also leveraging the campaign through its different social media platforms. People from other countries who visit our land, metros, and towns also tend to “pack” Jumboking, and carry it back to their friends and relatives.

Venkat Mallik, Co-founder, Tidal7, the agency behind the campaign says, “The campaign considers Indian culture across work, family, relationships, habits, etc. Like, though we have different cultures and different tastes when it comes to Indians, we are all one. This concept is the base for the present campaign “Different Tastes One India” and its a part of the brand’s overall claim of being the Burger of India”.