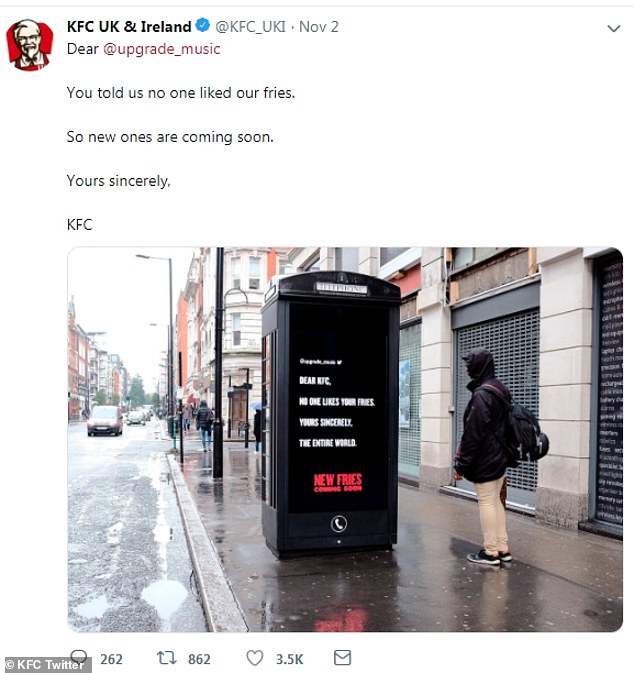 KFC turned its social media haters into their brand advocates. They took a customer’s negative tweet about their fries and turned it to a win for the brand. KFC reached out to that person and they have built a marketing campaign off the back of strongly-worded harsh consumer feedback. Instead of shrinking away from the harsh feedback from Twitter user @upgrade_music, they have succeeded in using social media negativity to their own advantage.

The ‘Ain’t No Small Fry’ campaign, launched on Twitter with KFC is designed to convert its fries haters, as the response to the tweet reading: ‘Dear KFC, No one likes your fries. Yours sincerely, The entire World.’ They have developed this campaign to show the public that it has listened to the feedback and will be rolling out new recipe fries. Later KFC’s new chips were top of the news agenda and the most read story on the BBC.

When this kind of negativity arises in the social media, KFC had the courage to address that efficiently, able to communicate that they are always there to listen and hear the consumers, making changes to keep the standards. This turns into a fantastic example of using negative comments online to not only improve the business but also to use it as an advertising platform. They were able to create a perception that they listen to the consumer feedback and flexible enough to make appropriate changes to keep standards, thereby they just turned a detractor into the biggest advocate.

This is pointing out to how to deal with negativity and other issues that will make somebody an advocate or a director. This approach also led to KFC UK and Ireland and Mother winning the social media award at the Marketing Week Masters.

The campaign had a clear impact on the business. It prompted awareness of the new fries to hit 62%, well above the target of 50% and 38% increase on the pre-campaign test. Also, the taste scores got improved across every measure, while KFC’s scores for relevance were up 3%, generosity by 4%, trustworthiness 4%, and food quality 1%, among those who aware of the campaign. Through the campaign, penetration also improved by gaining 6,69,100 more buyers.

Passionate In Marketing - July 13, 2020
0
COVID -19 has taken a heavy toll on the lives of millions of people in the world. Putting the whole world...

Coca-Cola comes up with the great meal campaign