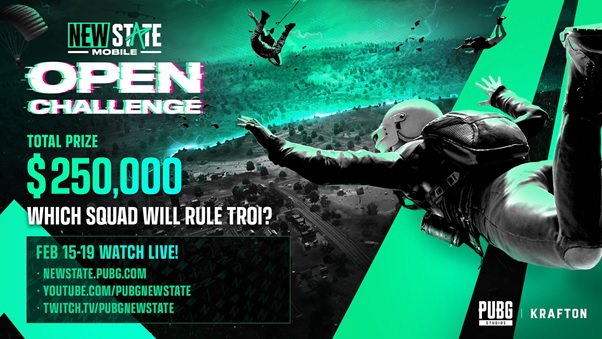 The $250,000+ USD NEW STATE MOBILE Open Challenge amateur esports event will be hosted in Korea and expand with other global events in the future

Mumbai, January 20th ,2022 – KRAFTON, Inc. today announced it will host its first official NEW STATE MOBILE esports event in Korea from February 5-19 2022. With a prize pool of more than $250,000 USD, the NEW STATE MOBILE Open Challenge will offer the largest payout for an amateur esports event in the history of the country. During this event, players will exclusively play NEW STATE MOBILE’s new BR: Extreme Mode, which launched globally on Android and iOS last week as part of the game’s major January Update.

The NEW STATE MOBILE Open Challenge is the first esports event KRAFTON has planned for NEW STATE MOBILE in 2022, with plans to host more global events in the future. The goal of all upcoming events is to continue supporting the game’s community of highly-skilled players who enjoy intense, competitive and unique battle royale gameplay. Specific to the NEW STATE MOBILE Open Challenge, only Korea-based players who have earned Gold Tier or higher during Season 1, which began earlier this month, will be eligible to participate in the event. Eligible players may apply HERE to participate in the event through Feb. 2.

Exclusive to the game, BR: Extreme Mode is a new mode that evolves the mobile battle royale experience. The mode limits the number of players in a match to 64 (versus 100 players) and limits each round to 20 minutes. Currently available on the game’s Troi map, BR: Extreme Mode is still firmly set in the battle royale genre, but is designed to get players into the action as quickly as possible for increased intensity each match. In this mode, the battleground is restricted to a smaller playable area (4×4) within the Troi map, which will be chosen at random and change every match. All Survivors start off with a P1911 handgun, a smoke grenade, 300 Drone Credits and fully charged boost meters. When the match starts, two Care Packages will be dropped at random locations, allowing players to stock up on higher-end gear earlier in a match.

For all qualified players in Korea who are at least 15 years old, the event will be held both online and offline. The current schedule is as follows:

Each match will feature eight teams of four players battling it out on the game’s new BR: Extreme Mode. The NEW STATE MOBILE Open Challenge will also leverage the components of the Standard and Universal PUBG Esports Ruleset (SUPER) used by PUBG: BATTLEGROUNDS, where final standings are determined by both match “rank points” and “kill points.”

Rati Tikkha - May 24, 2022
0
MLC announced the initial conclusion of a $44 million Series A and A1 investment round sponsored by a group of America's most...