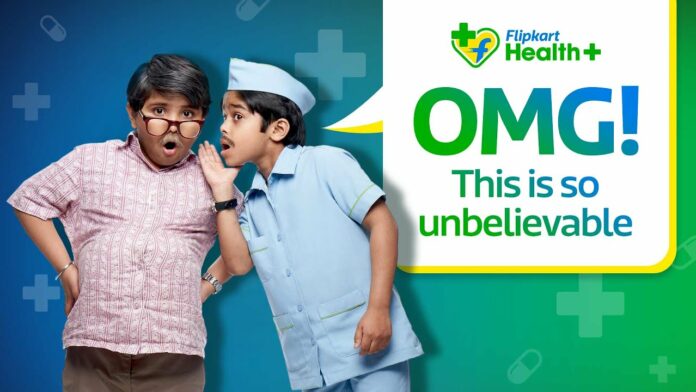 22nd April 2022: Flipkart Health+, India’s homegrown Flipkart Group’s digital healthcare marketplace platform, just launched its first pan-India advertising campaign, ‘Laughter is the best treatment.’ The ad emphasizes the value that the Flipkart Health+ app will bring forward through a variety of available medicine alternatives, as well as introducing viewers to the perks that they may receive when purchasing through the Flipkart Health+ app.

Lowe Lintas created the ad campaign, which explores the idea that while “Laughter is the best medicine,” Flipkart Health+ is the place to go for all other medications. The ad highlights the iconic ‘kidults’ and expands on their funny discussions to highlight the Flipkart Health+ app’s capabilities. The campaign highlights the iconic ‘kidults’ and capitalizes on their humorous banter to promote the Flipkart Health+ app’s capabilities. The film’s narrative portrays the brand propositions of trust, value, convenience, and choice seamlessly.

The campaign includes two digital ad films, the first of which is targeted at the Bengali audience in the eastern area, and the second of which is a narrative for the entire Indian market. The campaign emphasizes how the app will help to solve the problem of limited access to genuine medicines in India. The commercials are created in a unique approach to reach out to audiences and establish the app as a platform for daily pharmaceutical procurement for acute and chronic illnesses. The ad films are incredibly approachable and catchy for the target audience due to the simple narrative and real issue backdrop.

Dhruvish Thakkar, Senior Director, Head of Marketing and Revenue – Flipkart Health+, commented on the campaign’s launch, saying, “According to research, consumers in emerging areas across the country have trouble finding genuine medicines for chronic ailments. Consumers may get high-quality, inexpensive products across 20,000 pin codes with Flipkart Health+. Our campaign aims to convey this message using a unique humor style influenced by our in-house brand, Flipkart.”

When it comes to health, laughing is truly the best medicine, “remarked Sonali Khanna, Executive Director and Head of Lowe Lintas, South,” in response to the campaign’s launch. With its tongue-in-cheek humor, our kids’ campaigns for Flipkart won over the target population and broke the norm by engaging with their audience.

This World Photography Day, Canon strikes a chord with every Indian...