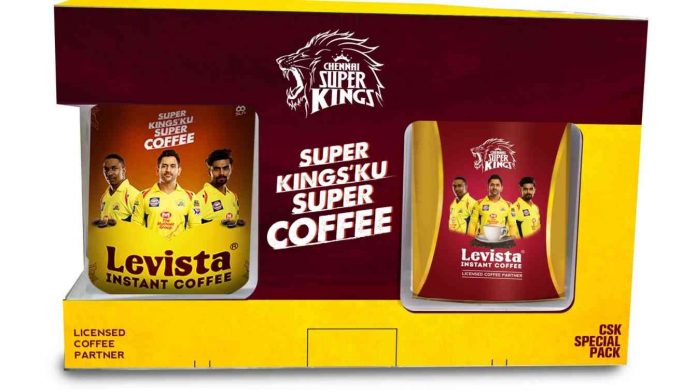 The first time ever Levista Coffee partnered with Chennai Super Kings as the Official Licensed Coffee Partners in IPL 2020. The brand launched a new campaign ‘Divided by taste, united by Levista’ which will kickstart the partnership. With the help of this campaign, Levista Coffee aspires to leverage the strong fan base of CSK binding the emotions of being an ardent CSK lover with a cup of Levista’s yummy coffee.

The campaign goes live with a series of TVC ads that showcases an intrinsic message of uniting family and friends over a cup of Levista coffee as they revel in the action-packed/ high octane fan fervour of Chennai Super Kings matches. TVCs is showing the transcending fan base of Chennai Super Kings and Levista coffee in three interesting scenarios.

At first, TVC depicts a new bride in the family who is extremely excited watching the game, while other family members remain “civil” however it is a cup of Levista Coffee which makes the entire family celebrate together. Secondly, TVC showcases a house owner who gets himself refreshed when he is offered a cup of Levista coffee by a group of men who were enjoying the match even before the house owner came, after which they both enjoy the match together. Thirdly TVC shows a WFH woman on a video call, who is getting worried about seeing the excitement of her partner in watching the CSK match. After a cup of Levista coffee, she also joins the celebrations. And this is what the campaign is for. Levista Coffee complements the celebratory sentiment of a happy consumer for this cricket season. Levista Coffee is looking forward to establish the niche of “instant coffee” among the CSK fans as well. And we hope the campaign will become a great success.

The brand Levista Coffee also planned many contests and exciting consumer initiatives across radio and digital platforms to engage IPL viewers through trivia, contests and more. These things will surely enable them to enjoy the much awaited excitement from the safety of their home. A special limited edition “Combo Pack” was also launched by the brand in its instant coffee range as well as other collector’s worth package with limited edition Thala MS Dhoni and CSK team coffee mug and a Levista Coffee 100 gms coffee, a coveted keepsake for coffee fans as well as cricket fans.

During the launch of TVCs, Mr. S. Shriram, Vice President – Marketing and Sales, Levista Coffee told that they are very excited to launch the campaign with the three TVCs which elloborate the essence of watching a CSK match. He also told that CSK is an emotion which brings together family and friends to view while enjoying a cup of yummy Levista Coffee

Passionate in Marketing - January 14, 2022
0
Nourish store at Ayodhya is the company’s 15th exclusive brand outlet  in the country.Bareilly based, FMCG company, already has 14 exclusive brand...