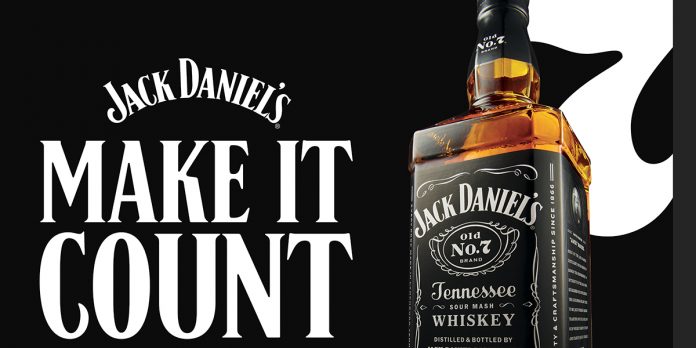 Jack Daniel’s is being globally relaunched with a new ‘Make It Count’ tagline.

‘Make It Count’ showcases a modern way of thought about the 154-year-old brand that honors the people who drink it, as a brand that is internationally loved and found in more than 170 countries around the world. Make It Count is brought to life in 100 + nations concurrently through various executions on Television, social media, digital, out-of-home, and print platforms. It was time for Jack Daniel’s to showcase their distinctive vision of the world as a multinational brand that wished to fuel his legendary status. The latest “Making it Count” campaign reflects on the effect on people’s lives as they chose to choose each day boldly and with intent, much as Mr. Jack did in his own life.

Matias Bentel, Chief Brands Officer of Jack Daniel’s parent company, Brown-Forman, said, With Make it Count, they have a long-term platform that resonates with consumers, especially in today’s environment, and carries the message of Jack’s bold, independent spirit. They believe that this world-class creativity will help propel  Jack Daniel’s brand’s successful globalization.

Vineet Agrawal, Marketing and Commercial Director, India, Brown-Forman, said that they are delighted to launch this new artistic platform that cuts through cultures and is a clear articulation of living confidently and making the most of every moment. That is how Jack lived his life, we know, and we believe that these values still resonate today. In a broad, bold manner that will build sense and distinction in the hearts and minds of the next generation of customers, the latest innovative platform reintroduces Jack Daniel’s to the world.

A retro Jack Daniel commercial reading inspired the advertisement, “Proudly served in fine restaurants and dubious joints.” It served as a reminder that Jack is for everybody. ‘Make it Count’ is a long-term medium that, particularly in today’s climate, resonates with consumers and carries the message of the bold, independent spirit of Jack. ‘Make It Count’ will be promoted and brought to life in the Indian industry over the next few months as well as through a multitude of brand events.

Passionate In Marketing - October 23, 2020
0
Marico, one of India's leading FMCG companies, has announced its entry into the Chyawanprash segment with the launch of Saffola Arogyam Chyawan...