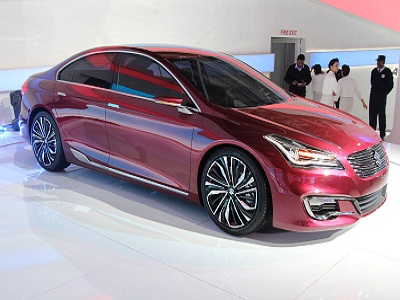 He also revealed that among the 10,000 consumers who have made pre-bookings for the sedan Ciaz, 60 percent have sought after for diesel cards and the remaining 40 percent for petrol. Also, it is claimed that about 9 percent of this sales would be achieved from Kerala where the sedan was launched today.

The Ciaz is developed on a brand new platform and is claimed to be longest and one of the widest sedans in this class. The auto maker has invested around Rs 620 crore for the development of this sedan along with its vendors.

TheIndiabased vendor has recording a growth rate of 44.7 percent for the first half of the current fiscal from the time frame between April and September. Moreover, it is expecting to witness a double digit growth, whereas the entire automobile industry witnessed only a single digit growth. Moreover, in the time period between April and August last year, Maruti witnessed a growth of 15.8 percent, whereas that particular industry saw only 2.9 percent growth.

It has to be noted that auto maker has been focusing on the rural markets for the past six years and this fiscal there has been a significant growth of 31 percent in the sales volume from those regions. Five years down the lane, the rural sales of the vendor were only five percent notably.

Talking of the entire automobile industry, the executive claimed that there was a decline in the volume for the 2013 to 2014 fiscal year. Moreover, with the gap between petrol and diesel prices declining, the demand for diesel vehicles has witnessed a drop. While in 2012 to 2013, diesel vehicles made up to 58 percent of sales, whereas in 2013 to 2014, it dipped to 53 percent and in the first half this fiscal it has further declined to 50 percent.

Starbucks to sell burgers and to have dinner options through La...

Amazon.com to launch some kind of smartphone or device on June...

Hot destinations for global retailers in 2012

Johnny Rockets to launch operations in India, to take on McDonald’s