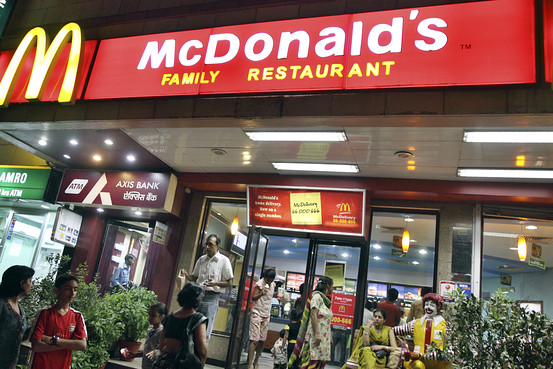 World’s largest restaurant chain, McDonald’s has altered its Indian menu by cutting down some calories off its burgers. Well, the restaurant chain has shed away 50 to 60 calories from its burgers, 40 percent of fat in the sauces and around 20 percent sodium content in fries on an average. This move from McDonald’s is targeted at the health and diet conscious Indian consumers.

On the whole, the products offered by the restaurant contain around 8 percent to 10 percent lower calories. However, it does not fall into the healthy meal option, and McDonald’s in India is claiming that it is trying to make its products appealing to those looking out for relatively low calorie burgers and fries, and it may not be suitable for the highly health conscious ones.

Regarding this, Amit Jatia, Vice Chairman, Webtlife Development involved in operating more than 200 McDonald’s and 30 McCafe outlets located in Southern andWestern Indiasaid that this move is to make the restaurant a better one for its consumers. He added that any firm should meet the requirements of consumers, and if the latter sticks on health, the firm cannot be heading in the other direction.

As there is a common product development team and supply chain across all the McDonald’s outlets inIndia, low calorie merchandize is provided in the Northern and Eastern regions of the country as well. This is not the first move McDonald’s has taken towards the healthy side. Since four years, the restaurant is involved in such activities, and it has come up with all-grilled breakfast options, egg burgers and ice-creams with less than 3 percent fat. This was possible as the firm took calorie counts, protein, carbohydrate and fat content of its products.

The executive added that McDonald’s is not looking to alter the formulation as it might result in compromises on taste. McDonald’s started considering such options as it could not quench the needs of health conscious consumers inIllinoisand Oak Brook, who prefer other restaurant chains including Subway and Chipotle Mexican Grill. Eventually, it was noted by McDonald’s CEO Don Thompson that the firm reported a 21 percent drop in its global profit in the last quarter.

Passionate In Marketing - April 6, 2013
0
April 6,2013: As the Indian quick service food market expands there are many a fast food chains which are setting up base in India....

Best foods to market rice through 800 new outlets; To foray...

Partnership of Snapdeal and Tata Capital to finance up to Rs...

Why World Nutella day is Cancelled

Sales of two wheeler segment in India grows by 14% in...