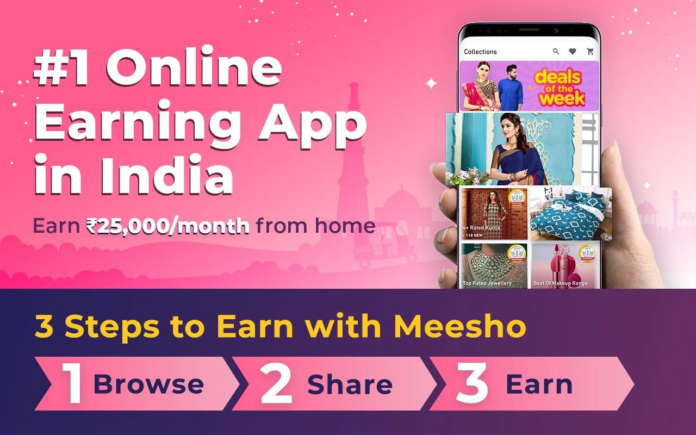 Social e-commerce (shopping and reselling) app – Meesho is often considered a reliable medium to earn some money. This app has earned a massive growth of  750% in users, from that of last year.

The Maha Indian Shopping League happened from the 6th to the 9th of October, considering the festive season and its sales. This 5-day flagship festive sales event of Meesho has got very much into the Indian Markets.

Nearly 60% of the total demand was driven by Tier 4+ markets, including remote locations like Khawzhwal and Sopore and 80%  came from tier 2+ markets. By this, the Shopping League served to be the initial plunge for many to start using Meesho.

Meesho has been providing quality products at reasonable prices for the common man. Along with that, doing business on Meesho is considered quite easy to operate too. The 0% commission scheme launched earlier this year was seen doubted, but in fact, the users saved over 136 million during this Shopping League alone.

In sales, there was a growth ten times higher than last year. The seller participation too rose by 314%. Vidit Aatrey, the founder and CEO of Meesho stated that this startup app itself is an initiative by them to digitize Bharath.

The fashion category store too had a significant transition. Women’s products and accessories saw an increment of 623% and men’s items had 640% of more orders than previous years.

Maha Indian Shopping Mela by Meesho seems to redefine the business during the festive season by going beyond the proportion of discounts given and a number of users winning prizes worth around 15 crores.

Last September, Meesho raised $570 million in a new round of funding led by US asset manager Fidelity Management & Research Company and B Capital Group. After this, its valuation is to be more than doubled to $4.9 billion in less than just six months.

Meesho is rightly called a business-to-business platform. The major online shopping platforms like Amazon, Flipkart, and Myntra had also introduced their festive sales on October 5th, which seemed a tight competition.

But, Meesho has grabbed more than 100 thousand sellers better than other competing platforms. Meesho also helps small businesses sell their products through WhatsApp or Facebook, which makes it a popular ease app among users.