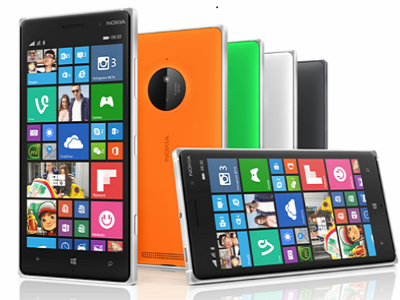 The Lumia 730 and Lumia 735 are identical in terms of specifications and they arrive with a 4.7 inch HD display that has a resolution of 1280×720 pixels. Under their hood, they house a 1.2 GHz quad-core Qualcomm Snapdragon 400 processor that is paired with 1 GB of RAM to look after the multi-tasking department. The handsets pack in 8 GB of internal storage space that can be further expanded externally by another 128 GB via an expansion micro SD card.

Being selfie focused smartphones, the duo are given a 5 MP front-facer that is coupled with a wide angle lens to click the self portrait shots with a wider frame or group selfies. There is a Lumia Selfie application to help in capturing, editing and sharing self portrait shots. Furthermore, the handsets flaunt a 6.7 MP rear camera with the Zeiss optics and f/1.9 aperture to capture more light.

The Lumia 730 and Lumia 735 run on Windows Phone 8.1 and they are packed with connectivity aspects such as 3G, Wi-Fi, Bluetooth, GPS, HERE Maps and 4G (only for Lumia 735). They include a 2,220 mAh battery that should be capable of delivering a decent backup under mixed usage.

The Lumia 830 is fueled by the latest Windows Phone 8.1 update called Lumia Denim and it is fitted with a 5 inch ClearBlack IPS LCD display with HD resolution and 2.25D curbed glass. It is stuffed with a 1.2 GHz quad-core Snapdragon 400 processor and 1 GB of RAM as the aforementioned duo and is bundled with 16 GB of internal storage space that can be expanded up to 128 GB. There is free 15 GB of OneDrive cloud storage capacity as well.

The handset uses a 10 MP PureView camera at its back with optical image stabilization, Zeiss optics and a 1 MP front-facer onboard. Other goodies onboard this model include Qi wireless charging support, 2,200 mAh battery, LTE, GPS and others.

Passionate In Marketing - July 1, 2020
0
The main two focus of the TV commercial for the hand sanitizer brand Savlon Hexa is defending and attacking which plays a key...