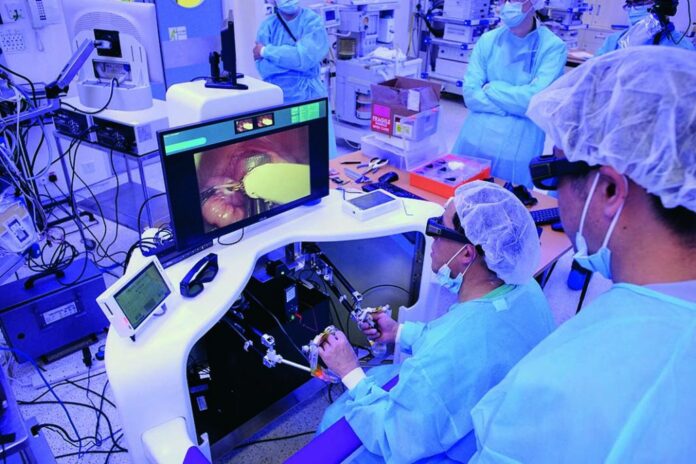 Minimally invasive surgery, a surgery that has been helping both doctors as well as patients for about half a century with safer surgery procedures. Surgical robots have recently started assisting the surgeons in the operation theatre and this lets the surgeons complete the surgery with great precision, control, and more flexibility than the ordinary surgery techniques. In comparison with the traditional surgery techniques, robotic surgery brings in more advantages like painless surgery, shorter recovery period i.e. about 3 days, reduced risk of infections, and loss of blood.

But the surgical robots are so large that they consume a lot of space in the operation theatre and some cases, they use almost the whole room. To resolve the issue of large space consumption by the robotic systems, a surgical robot in the size of a tennis ball which weighs similar to a penny has been created in a collaboration between the Wyss Institute of Harvard and Sony Corporation. Mini-RCM, an Origami-inspired mini model motion manipulator remote center was able to complete a very difficult mock surgery.

Suzuki, who started working on the mini-RCM with Wood labs in 2018 as part of a collaboration between Harvard and Sony said that the project was a big success. Suzuki and Wood switched to the Pop-Up MEMS production method invented in Wood’s laboratory to create the miniature surgery robot, in which components are placed on top of one another in layers that are bonded along, and laser-cut into a particular pattern that enables the ideal three-dimensional form to “pop up,” as in a children’s pop-up picture book. This technique significantly helps to simplify the massmanufacturing of small, complex structures that otherwise would have to be carefully manually assembled.

The team attached the mini-RCM to a Phantom Omni device to simulate the conditions of a teleoperated operation, which controlled the mini-RCM about something like a user’s hand operating a pen-like instrument. The first test tested the ability of humans to trace a tiny square smaller than the tip of a ballpoint pen, look through a microscope and either trace it by hand or trace it using a mini-RCM. The mini-RCM experiments improved the user’s performance significantly, reducing error by 68 % in comparison with the operations done manually.

The remarkable collaboration with the Wood laboratory and Sony exemplifies the vast amount of advantages and benefits that would be achieved from combining the industry’s real-world emphasis with the academic spirit of creativity. This collaboration undoubtedly would turn as a milestone in the technology world.

Passionate in Marketing - October 19, 2021
0
~ One of a kind experience arena that opens new and engaging avenues to experience the globally loved, fun brand~