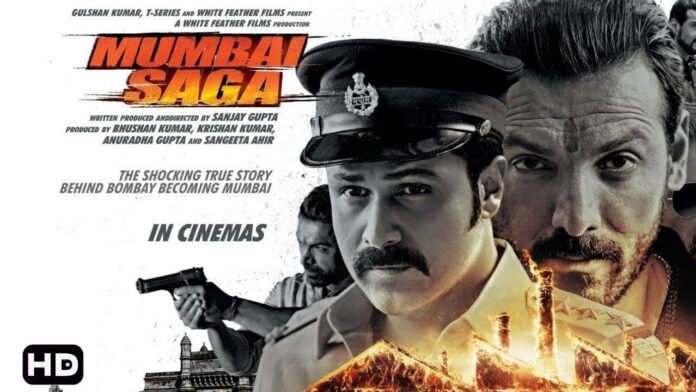 Bollywood movie Mumbai Saga is all set to appear on television for the first time. The Amazon Prime Movie Mumbai Saga will be a part of the popular TV channel “Sony MAX.”

Bhushan Kumar, Anuradha Gupta, Krishna Kumar, and Sangeeta Ahir are also movie producers. The movie was theatrically released on March 19, 2021, but later, it was also released on the world-famous streaming platform Amazon Prime Video on April 17, 2021.

The movie producers have decided to stream the World Television Premiere of the movie on the television. The headings of the movie were broadcasting on the SONY MAX, and buffs are thrilled to watch this movie on their television screen after a very long time.

Many people who have watched this movie before on Amazon Prime Video or in theatres were not as thrilled, but the new viewers will watch this movie, where this story will emerge soon on the television screen.

The World Television Premiere of the movie Mumbai Saga will premiere on Sunday, September 26, 2021, at noon. Along with this, SONY MAX is the only channel to premiere the whole movie till the end. You can see this film and get to know the real story of Amar Naik, who will be seen as Amartya Rao.

The movie has many remarkable Bollywood actors who have already worked in several films. Still, now, the vastly famous actor, Emraan Hashmi, and John Abraham did their first film together and has shared the true story of Amar Naik as Amartya Rao (John Abraham) and Vijay Salaskar as Vijay Savarkar (Emraan Hashmi).

The true-life story of Amartya Rao and Inspector Vijay Savarkar will show the story of the gangster how an ordinary boy named Amartya Rao is compelled to become a gangster of Mumbai and kill all of his rivals. Inspector Vijay will appear to clean the city and assassinate Amartya Rao. There are several other exciting things to watch in this film.