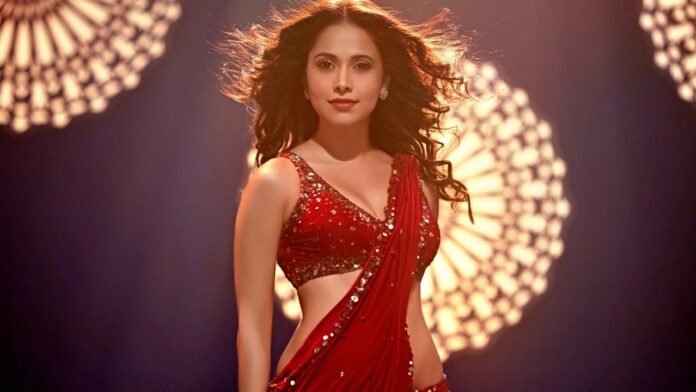 Nushrat Bharucha, an exceptional actress, who has been praised in the rom-com genre, is currently all set to explore the horror genre. Recently, the actress took to her social media to disclose her next project and it will surely leave her fans in impatient eagerness.

Nushrat was last seen in the movie, Dream Girl, opposing Ayushmann Khurrana, is all set to play the lead in a horror movie named ‘Chhori’. The movie is a Hindi remake of the Marathi movie ‘Lapachhapi’.

The story will revolve around Nushrat’s character, it will be fascinating to see her in an all-new avatar on-screen. In addition to the movie ‘Chhori’, Nushrat has some other intriguing propositions in the pipeline.

Vishal Furia, the director of the actual film, will also steer the Hindi remake of the Marathi horror-mystery Lapachhapi, which featured Pooja Sawant and Vikram Gaikwad, ‘Chhori’. Nushrat wrote that she’s excited to work with the amazing Vishal Furia.

Nushrat Bharucha is ready to explore the horror genre with her new film Chhori. The actress declared her new project on social media on Thursday.

The remake will be financed by Indian production company Abundantia Entertainment and the international production house Crypt TV.

Nushrat Bharucha said that she is thrilled to announce her next film, “#Chhori – Something shockingly scary is reaching your way!”.

Vikram Malhotra will embody Abundantia Entertainment while Jack Davis will produce Chhori on behalf of Crypt TV. The actual film, Lapachhapi, is said to be one of the amazing Marathi horror movies.

Speaking about the film, Nushrat said in an interview that, This genre excites her and the fact that the story is attached to practices of our society, makes it relatable and impactful. She has wanted to work with Vishal Furia and is so glad to collaborate.

Nushrat Bharucha made her debut in 2009 in the Bollywood movie, Kal Kissne Dekha. Then she went on to star in movies such as Pyaar Ka Punchnama 2, Sonu Ke Titu Ki Sweety and Dream Girl. Nushrat Bharucha was also seen in Hansal Mehta’s Chhalaang, in which she shared screen space with Rajkummar Rao.

Vishal Furia in an interview said that When he got to know that Vikram Malhotra and Abundantia Entertainment were considering a remake of his film, he was thrilled, simply because he believe there is a lot more he wants to say with this story. Getting a chance to reanalyze the film has been an amazing experience. He wants to take the remake a few steps further and make a much more impactful, spooky, and intriguing movie, more so because he is grateful for all the love he still receives for Lapachhapi. Collaborating with Vikram and his team along with Jack Davis is amazing and he feels confident that they can take this film to even bigger heights.

He said that Nushrat is a very strong and promising actor who I believe is well prepared to essay a strong role all by herself.