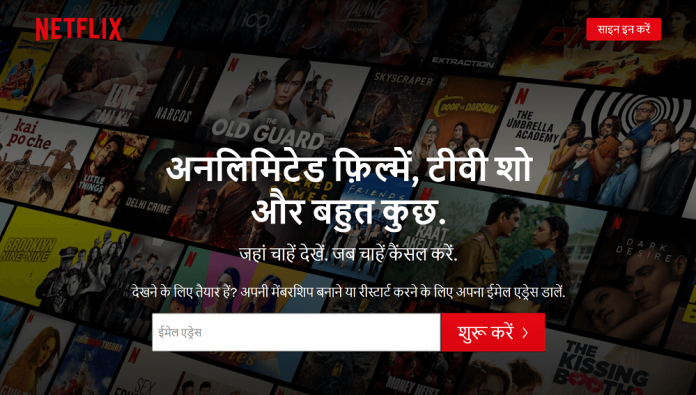 Netflix, the leading American technology and media services provider and production company recently launched its user interface in Hindi, enabling its users who prefer the Hindi language to access and enjoy Indian and international films and series available on the platform.

The move by Netflix is set to improve its user base by removing the language barrier and thereby providing easier access of content to its users.

The users of the Global online Entertainment streaming service giant can now switch to the Hindi interface by choosing Hindi from the ‘language option’ available in the ‘manage profiles’ section on their TV, mobile browsers or desktop. Since Netflix provides the facility to set upto 5 profiles in each account, the language setting can be changed for each individual profile. The introduction of this feature will completely transform the Netflix experience for its users who will find it easier to sign up, search content and make payments across all devices.

The new feature of switching the user interface to Hindi will be available to Netflix users residing outside India as well.

Amazon Prime Video, the primary competitor of Netflix had already successfully introduced its Hindi interface to its users two years ago. Other online entertainment streaming service providers like JioTV and Hotstar have also been successful in capturing the market share in India, whereas Netflix is lagging behind currently.

In the current situation of a global pandemic, consumption of content through online streaming services has increased significantly. To capitalize on this rising trend, Netflix has been providing fresh content to its users along with features like Parental Controls, Smart Downloads and the Top 10 Row.

Priyanka Rajan Chirayath - May 12, 2021
0
AnyMind Group, a brand enablement platform that offers technology and solutions for publishers, advertisers, business owners, and influencers, has launched a suite...