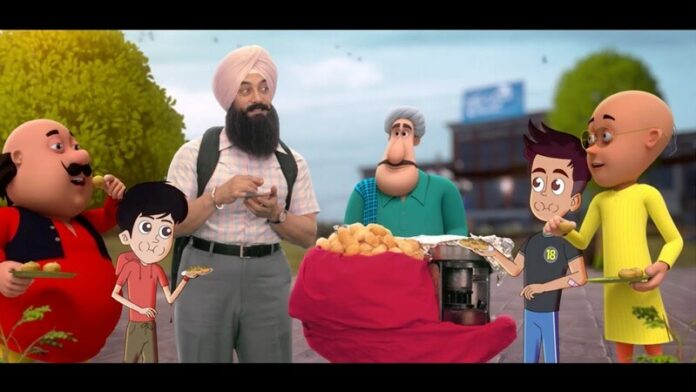 The film tells the lovable narrative of the tenacious Laal Singh Chaddha, who, like Nicktoons Motu Patlu and Bhoot Bandhus, overcomes all hurdles by innocence and character strength.

Nickelodeon’s involvement has increased current enthusiasm for Laal Singh Chaddha through unprecedented and engaging efforts that will bring entertainment and exciting experiences for families to enjoy together. The month-long integrated campaign will feature Aamir Khan in his Laal Singh avatar having fun with India’s favorite Nicktoon characters such as Motu, Patlu, and Pinaki & Happy – The Bhoot Bandhus.

The deep integrations will see Laal immerse himself in the world of Nicktoons smoothly, with concepts that establish resonance with the character of Laal, who possesses childlike simplicity and honesty, much like Nickelodeon’s young viewers and Nicktoons. Kids may meet megastar Aamir Khan through Nick’s Golgappa Party contest and Sonic’s Bhaag Laal Bhaag contest, as well as win a slew of amazing prizes by just participating in the on-air contests.

Nickelodeon has also made every effort to reach out to its young audience with exciting contests such as the Chaddi Buddy Contest with Aamir. Finally, a creative virtual running game that is likely to spark conversations while keeping students on their toes adds to the never-ending thrill. The virtual game, which can be found on nickindia.com, lets you play Laal, Motu, or Patlu and pursue the feather while collecting cash and avoiding evil.

Speaking about reaching out to children with this family entertainer and working with Nickelodeon superstar Aamir Khan, he stated, “Laal Singh Chadha is an uplifting film, and the purity and honesty of the likable character of Laal is likely to strike a chord with children and families. This hugely engaging and entertaining partnership with Nickelodeon and its characters that reflect the same good attributes as Laal was therefore a fantastic opportunity for us to take the narrative of Laal Singh Chaddha and make it a part of every child’s life alongside their favorite characters. We are confident that children will enjoy witnessing our work of love with their family and look forward to the same.”

In addition to the tentpole campaign IPs and sweepstakes, Laal Singh Chaddha breaks bumpers will appear on important Nick and Sonic shows. The campaign also includes original posts and stories, as well as influencer outreach, across the Nickelodeon franchise’s social media channels and other digital media platforms. We’re confident that the adventures of Nicktoons and Laal Singh Chadha will keep families entertained this Independence Day weekend.