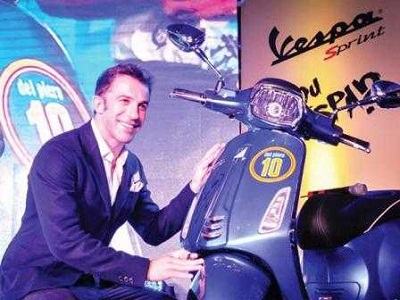 Piero played at the 2006 FIFA World Cup and Italy won the world cup that year. As a part of his association with the two-wheeler manufacturer, the football player who would be the Vespa global brand ambassador will visit India on September 1. An event will be conducted with several activities and interaction as well with media.

Regarding this announcement, Stefano Pelle, the Managing Director of Piaggio India stated as follows. He said that the company is highly excited to have the football player Alessandro Del Piero as the brand ambassador of the Vespa brand. Both Piero and Vespa have several things in common. These are two famous Italian symbols that are well known and recognized across the world for their success. Both have a thoughtful impact on the public opinion.

Lately, there was information from the manufacturer Piaggio that it will be entering into the Nepalese market. Also, the company is all set to launch more scooter models this year. With the football player Alessandro Del Piero, the two-wheeler maker Piaggio can lure the attention of customers across the world.

Piaggio Vehicles Private Limited (PVPL) is a subsidiary of the Piaggio Group that was founded in the year 1884. Gradually, the manufacturer became the two-wheeler market. Some of the vehicles launched by Piaggio include Bygone, Vesper, Aprilia, Moto Guzzi and Ape.

Passionate In Marketing - September 1, 2013
5
Eveready name is almost a synonym for dry cell batteries in India. The company has close to 50% market share in both dry cell...

UGC Intros ‘One Student, One Tree’ Campaign to Create Awareness among...

Skoda in Plans to Expand Portfolio in India