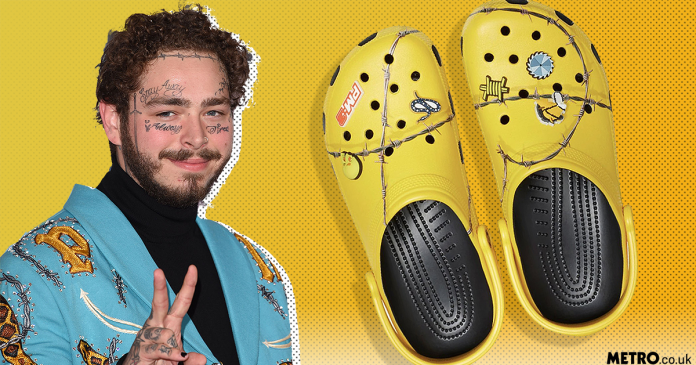 Those who have used the crocs brand shoes usually are in love with them. They are super light, durable, and can fit into any occasion. The Crocs brand has become very popular since its inception in 2001. What initially started as a boating shoe for those who go us to sea, eventually grew into the two-billion-dollar industry that we know today. RIAA Diamond certified recording artist Post Malone has been a long-time fan of the brand and started collaborating with them in 2018. They just announced their fifth collaboration in which two variants were released.

Named as the Post Malone x Crocs Duet Max Clog II comes in a pink and black silhouette. Both of the variants are to feature an exaggerated, chunky outsole, pivotable backstraps with adjustable hook and loop closures, Post Malone-branded rivets, and lanyard clips. Being a true fan of the brand, the artist can envision the clog silhouette in a different light. In addition to footwear, the partnership also came up with PostyCo Pink 3 Pack, and PostyCo Black 3 Pack of Jibbitz™ charms, with each 3 Pack as unique as Post Malone himself. To elevate the experience of the brand Post Malone gave away 5000 pairs of the limited-edition shoes in New York, Los Angeles, Chicago, Dallas, Austin, Salt Lake City, Toronto, London, Sydney, Tokyo, Paris, and Berlin in hopes to provide comfort, optimism, and joy at a time when it’s needed most.

Post Malone said that giving away 5,000 pairs of shoes is how he’s saying ‘thank you’ to his fans. He also said that Each time they partner, they make something better than before and that he’s excited about what they came up with this time around. The limited-edition shoes will be available in India at VegNonVeg online and offline stores on 19th Dec at 11 am. They will cost Rs.4995 while the PostyCo Pink 3 Pack and PostyCo Black 3 Pack of Jibbitz™ charms will be available separately for INR999.

Heidi Cooley, Head of Global Marketing for Crocs said that it was their biggest and most impactful Post-Malone X Crocs drop to date. She also said that in addition to surprising some of Post Malone’s biggest fans with free shoes, they are offering consumers two styles to choose from, plus special Jibbitz™ charms for the first time.