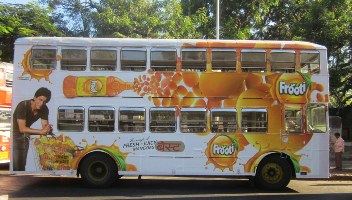 When Parle Agro was mulling over whom to assign the new brand campaign so as to create a high impact decibel across the country, the organisation which they shortlisted to undertake this task was India’s leading outdoor agency Posterscope. Posterscope which deals with clients across categories like Consumer Durables, Lifestyle, FMCG, Real Estate etc. is part of the Aegis Media’s Posterscope Group in India.

Parle Agro tied up with Posterscope to spread the new high decibel campaign and the agency has successfully spread the communication to more than 40 cities which includes Tier I cities, Tier II cities and Metros. These markets have been the key markets for Frooti and Posterscope has spread the magic of Fresh n Juicy Frooti in its own unique way. What  Madhur Pandey, Marketing Head, Parle Agro had to say about the role of Posterscope in carrying out these campaigns was, “We are very happy with the way our outdoor campaign was done, as it has given the desired buzz for the brand. Posterscope has meticulously worked on the brand and have played an important role in giving an upper edge to the brand this season. ”

How Posterscope spread the campaign was by using Prism Set of Tools and Outdoor Consumer survey (OCS). The agency carried out a thorough market research study for efficient planning and to optimize the outdoor plan. They also connected with the target group spread across Tier I and Tier II cities and metros with local flavour and went for focused spends.

Differentiation which is the key was created by Posterscope with right media mix and for that they used more than 1000 media. They used 10 different media formats as well after the impact through media was created by largeness. Posterscope meticulously used innovative ways of marketing like using Mobile Vans, Bus Shelters and Kiosks. They strategically placed the Billboards as well which helped the brand in getting a higher OTS. All these media strategies helped Frooti to communicate the new brand campaign effectively and this has created immense buzz in the market.

Author - January 12, 2022
0
By the New Year, the prices of air conditioners and refrigerators have increased due to the rise in material costs and higher...