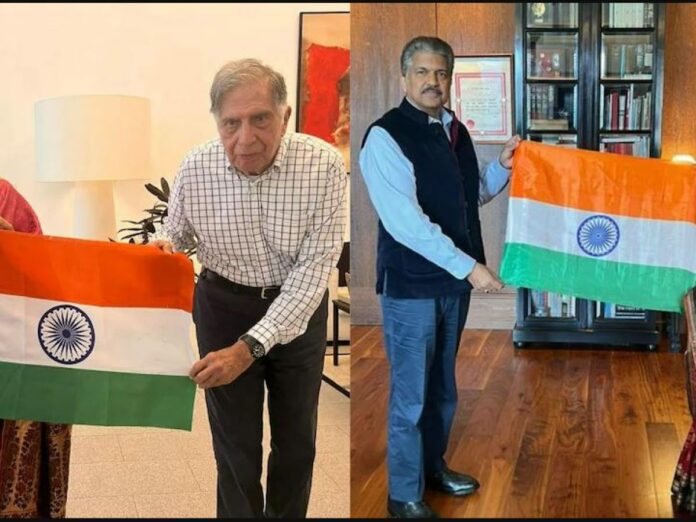 ‘Har Ghar Tiranga’ the Undergoing campaign, the Indian Post office presented Indian flags to business tycoons Ratan Tata and Anand Mahindra on Friday. With an objective to bring the celebration of Azadi ka Amrit Mahotsav to every household, the campaign was launched by Prime Minister Narendra Modi on 22 July. Azadi ka Mahotsav is the Indian government’s flagship drive to remember and celebrate 75 years of Indian Independence and the illustrious achievements, events and incidents that happened in India’s history.

Under the ‘Har Ghar Tiranga’ Campaign, the government focuses to plant around 20 crore flags on top of houses between 13 August and 15 August.

Accompanied by Ratan Tata, Postmaster General, Swati Pandey in person visited the 64-year-old Anand Mahindra to bestow the national flag to him ahead of the Independence Day Celebration.

It is worth noting that after the launch of the Har Ghar Tiranga Campaign, the sale of Indian flags has been persistently on the upswing. The government has also asked people to share their photos with the Tiranga on their social media accounts and the website https://harghartiranga.com. The campaign is an endeavor to amplify citizen participation in government initiatives and programs to add up to notable national gains.

Traders have claimed that the sale of all kinds of tricolours has grown 50 times since the statement of the campaign by Prime Minister Narendra Modi on July 22.

According to the government, the “idea behind the initiative is to entreat the feeling of patriotism in the hearts of the people and to promote awareness about the Indian National Flag.”Department of Posts (DoP) with its omnipresent network of 1.5 lakh post offices, has taken the ‘Har Ghar Tiranga‘ programme to every citizen of the country. In less than a short span of 10 days, India Post has sold more than 1 crore national flags, through post offices as well as online, to citizens,” India Post said in a statement Thursday, briefed that more than 1 crore flags had been sold in 10 days.