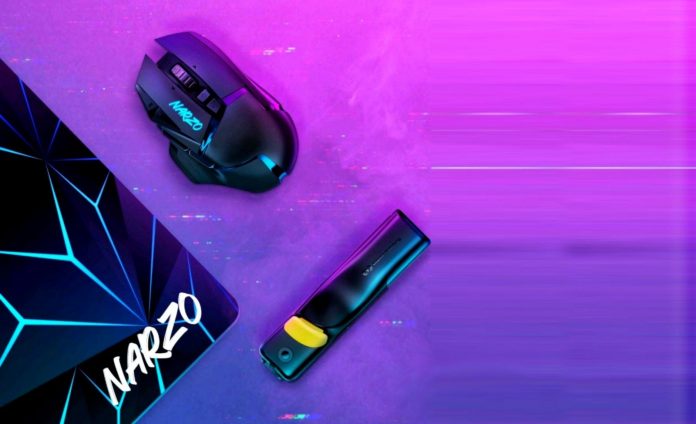 The Realme Narzo 30 series seems to be imminent. Although a specific date has not been announced, Realme has confirmed the existence of the Marzo 30. But it looks that Narzo may soon no longer be just about smartphones. A new leaked image shows a gaming mouse, a gaming pad, and a gaming trigger, all of them bearing the Narzo brand. It means, Realme is expanding into gaming accessories this year, and the highest milestone for the company could be the launch of its first laptop. Tipster Ishan Agarwal shared the photo on Twitter, claiming that all of those accessories will be launching alongside the Narzo 30 series of smartphones. The gaming mouse, which looks very similar to the Logitech G502 Hero, hints that the company is getting serious about PC gaming and indirectly points out that there might be a gaming laptop in the making. The gaming mouse pad is another such accessory that helps to achieve a seamless gaming experience. And the triggers could be smartphone gaming that the new Narzo 30 series could support.

Realme did not say when it was planning to launch the Narzo 30 series. Although a few days back the company confirmed on social media, the launch may not be too far away. The photographs did not show the designs of the phone. Realme smartphone with the model number RMX3161 has recently appeared on the TENAA certification website, is believed to be the Narzo 30 Pro. The model number of the Narzo 20 Pro is RMX2161. According to the TENAA list, the Narzo 30 Pro could come with Android 11 and have 5G connectivity. Although the chipset for this phone is not updated, it may come with the mid-end chipsets are either MediaTek or Qualcomm. Realme has so far opted for MediaTek chipsets for its low-end and mid-end 5G devices, but there is a high chance that the company could switch to Snapdragon 480 or Snapdragon 690 instead of Dimensity chipsets. This phone also has a 6.5-inch screen and a 4880mAh battery. It measures 162.5×74.8×8.8mm.

Realme launched the Narzo 20 series back in India in September. Among the three phones in this series, the Narzo 20 Pro was the most impressive one. The battery back up of the Narzo 20 Pro is a 4500mAh battery with 65W technology,  recharged in less than 40 minutes. A feature like this is the one to be admired. Many people are always on the go, and if they don’t like to carry power banks around somehow, 65W charging technology can bring the battery level up to 30% in less than 20 minutes. The battery itself is long-lasting: it died on me after 24 hours of exhaustion. Realme has made some of the beautiful phones available on the market. One of them is Narzo 20 Pro. Its polycarbonate body doesn’t look cheap at all. Powering the Realme Narzo 20 Pro is a MediaTek Helio G95 processor that also gives the Realme 7 its brains. I liked the way it handles multitasking on the phone without frightening. Gaming is also smooth on the Narzo 20 Pro, although you don’t need to be overambitious here.