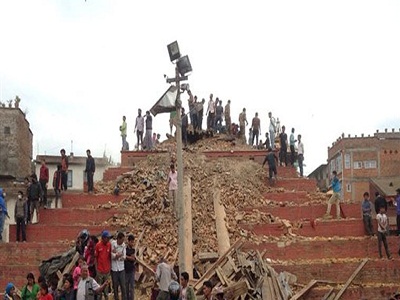 While there was a severe and tragic earthquake in Nepal on Saturday killing over 3,000 lives, the online retailers were sending promotional messages that were related to the natural calamity. Followed the issue raised by people over social media, the firms have come up with their apologies for the insensitive promotions that they were making.

Within hours of the tragic earthquake that killed several lives on Saturday, Lenskart the eyewear retailer sent out a promotional message reading, “Shake it off like this Earthquake”. Even fashion website American Swam’s ad read “Whooaa! This is an Earth Shattering offer”.

Several people who received such messages from these online retailers started sharing these messages and talking about them creating a backlash on the social media. There were reactions for the insensitive behavior of both Lenskart and American Swan forcing the retailers to apologize for their action.

It has become a common one to have discounts and deals on the online shops and this approach has made them more attractive than the physical retail stores. Due to the same, the online retailers are coming up with promotions everyday to lure the customers.

Regarding this, Lenskart’s co-founders Amit Chaudhary and Peyush Bansal mentioned in their blog post that was out on Saturday evening that they seek forgiveness for their promotional message related to the earthquake. Even American Swan came up with similar messages that show its apology.

Lenskart based inDelhiwas founded in 2011 and it is backed by a slew of investors such as TR Capital, TPG Growth, Ronnie Screwvala-led Unilazer Ventures and IDG Ventures. The fashion retailer American Swan received funding worth Rs 40 crore from the firm Four Cross Media.

The deadly and tragic earthquake that hitNepalwas epi-centered in the country and it has killed around 3,000 people. Also, around 50 people were killed inIndia, especially in the northern and eastern parts.

Passionate In Marketing - February 22, 2013
0
Feb 22, 2013: Sony India which has been facing stiff competition in the mobile handset market from biggies like Samsung, Nokia and Apple is...

Buy Samsung Galaxy S6, Galaxy Note 5 for Re 1 only

Audi to come up with more Manual Models to lure new...