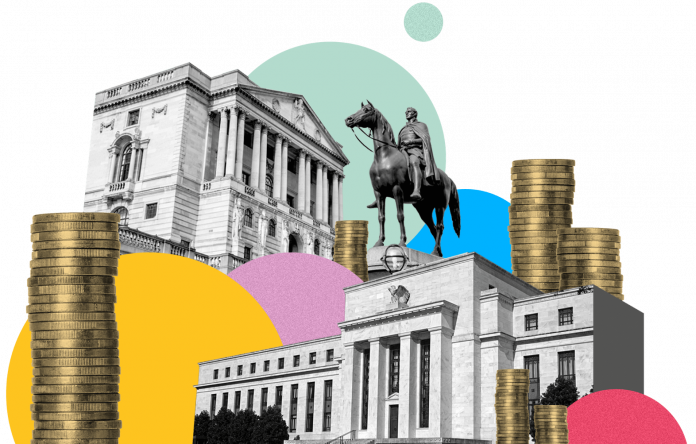 Markets are obsessed with the inflation debate, but a strong rebound, with or without inflation, will lead to a decline in central banks. All data suggest a strong recovery in the global economy as a whole and the US. All the estimates or the analysis forecasts that there would be a strong growth or rebound in the whole world economy in coming 1- 2 years.

The US economy is likely to grow strongly based on current and simultaneous indicators, Europe will eventually recover, and China is doing well anyway. Gradual and rising bond yields are a matter of time We believe that central banks will have to “downsize” their bond buyback programs in the not-too-distant future.

We see two realistic scenarios for the US economy over the next nine years. strong economic growth and high but temporary inflation, the current consensus view of the US Federal Reserve and strong economic growth and high inflation and structural, leading to faster cuts and rate hikes Central banks will have to reduce their bond purchases in both scenarios. For the time being, the bond markets have become slow, misled, or beaten by the actions and words of the central banks.

If there is no central bank, what will the yield and the market be like?

This question is not easy to answer given the anomalies associated with the “endless” purchase of bonds by the central bank and the “endless” nature of its growing balance sheet.

In the Indian context, the 12 months forward P/E (profits per earning) differs a lot based on the bonds purchased. based on the analysis and certain input data for the year ahead 2023 indicates the rise in interest and bond prices rise in the coming 15 months

The role of central banks in the market

-Adoption of a set of rules for regulation.

-Ensure better integration between the financial world and the real economy

Therefore, there would be no stability and efficiency in the financial market without any central bank, the central banks create a stable economic environment for the market by implementing some policies.