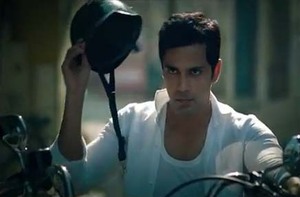 Frontline, the flagship brand of Rupa, the leading innerwear company in India has come up with a new ad campaign that promotes voting. Voting is still an unresolved issue in India and nearly half of the country does not turn up for voting. The leading brand which came out with a tagline “Sabse Aage” (Ahead of everyone) has now launched a campaign that says “Raho duniya se ek kadam aage” which means Stay a step ahead of the world.

The ad features a group of gangsters warning people in the streets not to vote. The frightened residents do not turn out for voting and that is when a man wearing Rupa Frontline innerwear emerges. He is seen tackling the mobsters cleverly and casting his vote. The ad film then ends over the tag line “Raho duniya se ek kadam aage”.

The ad film was created by Scarecrow communications and was inspired from a Bengali song “Ekla Cholo Re” which means even if no one responds to your call, just go your way alone. The song was written by Rabindranath Tagore, the poet who also composed our National Anthem “Jana Gana Mana”. The very thought behind the ad-film is to inspire people to continue their journey and go forward with a mission even if they had to face life alone. The ad-film is kept real, as exaggeration can get the humor part right and not the courage.

The soundtrack of the ad campaign was recomposed by Rooshin Dalal and directed by Gajraj Rao of Code Red Films. The new version of the ad is sung by renowned singer and musician Piyush Mishra. Both the composer and singer of the song have lighted the true spirit of the song and certainly a call for people to “Stay a step ahead of the world”. And people say “Rahenge ham is duniya se har kadam aage”.