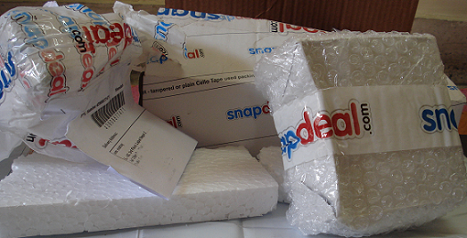 Rapidly growing online marketplace Snapdeal is looking out to acquire a significant stake in a logistics firm or foray into the industry to triumph over the challenges it is facing with delivering. This information was revealed by couple of sources familiar with the matter. Snapdeal is currently flushing with funds and has managed to raise about $627 million (roughly Rs 3,845 crore) as SoftBank, a Japanese internet media and telecom conglomerate invested in the firm in October.

One of the sources revealed that Snapdeal is eager to have a logistics on its own, but it is too late for the firm to build a network right from scratch. It was claimed that they are giving a thought on all possible options including purchasing a significant stake or establishing a joint venture control the quality.

The other source claimed that Snapdeal is most interested to debut with a minority stake and the right to buy the other stakes in future. All that they are looking for is a firm with a network across the country and a significant presence in the tier II and tier III cities. Additionally, their focus is on a firm that has a good reverse logistics as well. It was added that Snapdeal declined to comment on the queries related to their plan of getting into logistics.

It is claimed by the people close to Snapdeal’s development that the firm is planning to take a significant minority stake and later invest in IT and sync it with its own network as time goes.

As of now, Snapdeal is not willing to run the firm as a logistics one right away as it is not its core business and also it lacks service relationship in the market, claimed the sources. They stated that the online marketplace’s CEO and Founder, Kunal Bahl is driving the process.

Snapdeal is facing issues related to delivery as the other popular e-tailers in the country have a confined delivery system and it depends on third party logistics. For instance, Flipkart has e-kart and Jabong has GoJavas to handle their most of their shipments. Also, Amazon is working on building a logistics network for itself.