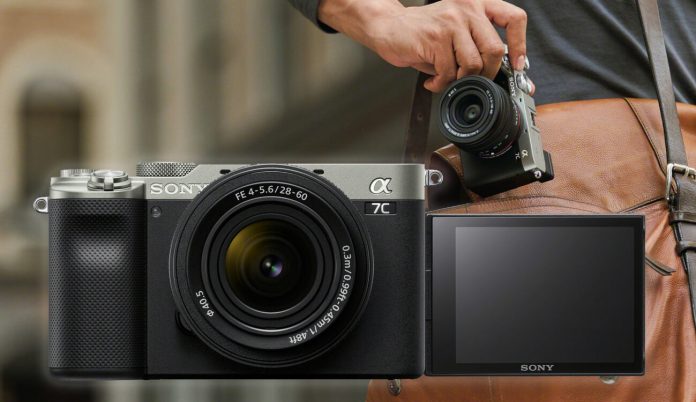 Sony India had recently launched its new super-compact Sony a7C full-frame camera in India. Sony a7C is ultra-compact and targets digital content creators with its special vlog-specific features. It can capture 4K videos and full HD videos up to 120fps and also features continuous shooting (up to 10 fps).

It was announced on September 15 in North America and now is available to Indian camera users. This newly-released ultra-compact camera mainly focuses on digital content creators and YouTubers.

In the Sony a7C, “C” stands for Compact and the camera is around 509 grams. The company claims that the Alpha 7C is similar in size and it weights to an APS-C camera, with only 1 percent more weight than the Alpha 6600.

The camera has abstracted a few characteristics from the Sony a7 Mark III on the specs and features of the Sony a7C. The a7C full-frame camera highlights real-time tracking AF with 693-point focal-plane phase-detection. Users are provided with the 5-axis in-body stabilization while shooting.

It is also possible to shoot continuously at up to 8 fps in live view mode. It also features a touch-screen LCD with approximately 921 thousand dots and thus it provides better visibility even in bright outdoor conditions.

The a7C provides headphone and microphone jacks for the convenience of its users.NP-FZ100 battery provides Sony a7C with enough power for long durations of shooting and to capture up to an industry-leading 740 images when using an LCD monitor, or 680 images when using a viewfinder. Other specs like a single SD UHS-II memory card slot that can be accessed from the side of the camera is available for its users. The a7C also provide various feature specially designed for vloggers.

Sony also announced its brand new full-frame cinema camera, the Sony FX6, for the global market. The camera can capture 4K videos and boasts the latest Bionz XR processor. The brand is always busy either with the conceptualization of a new product or in releasing one for its camera loving customers. Sony may also introduce its first-ever drone for vloggers (the Sony Airpeak) soon.