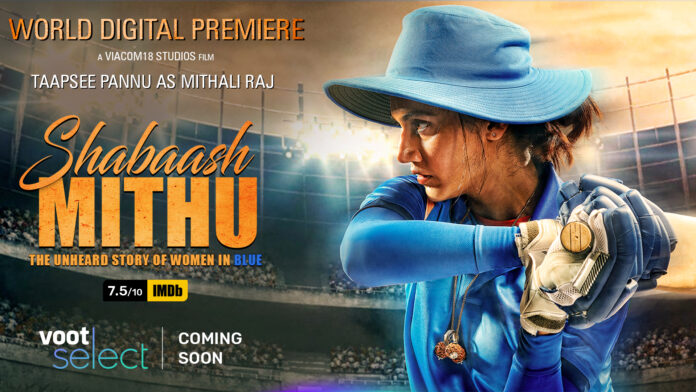 ~Based on the life of former Test and ODI captain of the Indian women’s national cricket team, Mithali Raj, the film beautifully captures the glorious journey of the cricket icon~

National, 9th August 2022:  In its endeavor to bring for its audiences a vast repertoire of diverse content, Voot Select is all set for the World Digital Premiere the Taapsee Pannu-starrer ‘Shabaash Mithu’ – based on the inspiring journey of the legendary cricketer Mithali Raj. The gripping sports drama, produced by Viacom18 Studios has already won hearts across India with its theatrical release earlier in July and is set to now capture the hearts of the digital viewers with its grand premiere on Voot Select in Hindi, Kannada, Tamil and Telugu. Directed by Srijit Mukerji, Shabaash Mithu also stars talented actors like Vijay Raaz, Devadarshini, Brijendra Kala, amongst others in key roles.

The film traces Mithali Raj’s journey from her childhood to the struggles she faced as she took the Indian women’s cricket team to the ICC World Cup finals, four times. It all started when her close friend Noorie introduced her to the electrifying sport. A star Bharatanatyam dancer in her class, a young Mithali held the bat for the first time in the company of her friends, which then led to a journey of sheer grit, determination, and hard work, as she went on to eventually become the youngest captain of Indian Women’s Cricket Team. But in a country that worships the ‘Men in Blue’, Mithali and her battalion had to overcome some serious obstacles to emerge as the celebrated ‘Women in Blue’.

Taapsee Pannu shared her excitement on the movie’s OTT release on Voot Select and stated, “This film is very close to me. As someone who prides in championing roles and characters that celebrate women, playing the character of an iconic and truly inspiring cricketer has been a matter of immense pride and satisfaction. It was a challenging character to portray, especially as every chapter in Mithali’s life revealed the many layers of this national inspiration. I am very excited with its release on Voot Select as now this story will have the opportunity to reach a much wider audience and hopefully, inspire other young girls and women to follow their dreams and passion in sports, akin to the relentless spirit of India’ cricket superstar Mithali Raj. I cannot wait to watch this special story once again at home in the company of friends and family and cherish this special moment, and really looking forward to seeing the audience’s reaction to the movie’s OTT release.”

It is time to celebrate the undying spirit of our ‘Women in Blue’ with an entertaining sports drama! Catch Shabaash Mithu, coming soon on Voot Select!