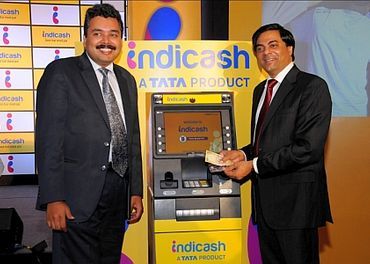 The launch of Indicash ATM is being seen as a major move for financial inclusion in the rural areas and Federal Bank has become the first bank to partner with Indicash. More banks are said to follow suit in the coming days. Indicash ATM which is the first White Label ATM from Tata would be accepting plastic cards of all the banks and a user can make five transactions in a month for free like any other ATM. Amount of not more than Rs.20 would be charged if more than five transactions are made. TCPSL would be getting Rs.15 per cash transaction and Rs. 5 per balance enquiry as per the revenue sharing model with banks.

Indicash ATM’s are considered to be user friendly and will be offering multi lingual services. The other services offered by these White Label ATM’s include bill payments, value added services, mobile payments, kiosks, mobile wallet services  and many more. TCPSL which got the licence from RBI to operate White Label ATM’s would be rolling 15,000 Indicash ATM’s over next three years out of which 10,000 would be in Tier III and IV towns . Rest would be in Tier I and II towns. They have plans to roll out 50,000 Indicash ATM’s by 2016.

Passionate In Marketing - June 1, 2020
0
The market for luxury goods was one of the most impacted segments due to Covid-19. Luxury Connect, a consulting and advisory firm...