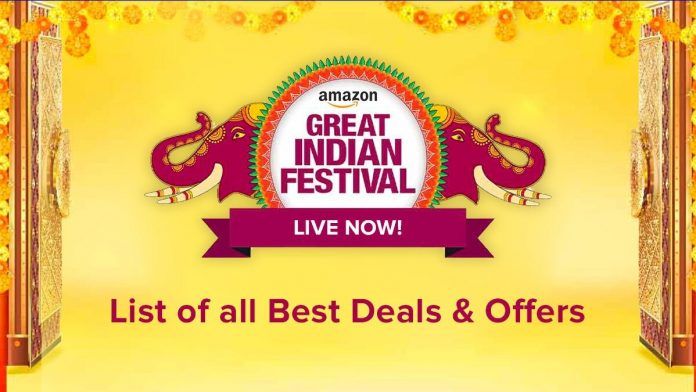 Amazon confirmed recently that its Great Indian Festival (GIF) has seen the largest ever opening for its distributors and brand partners. GIF started on midnight of October 16 including Prime Early Access and finally opened for all consumers on October 17. As per a statement issued by the company, the first 48 hours of the Great Indian Festival included more buyers and sellers than any opening two days earlier.

Over 1.1 Lakh sellers receiving orders; 66 percent sellers, 91 percent of new buyers, and 66 percent of small towns’ new Prime sign-ups; shopping in five Indian languages; and purchases in just 48 hours from over 98.4 percent of India’s pin-codes-it’s the biggest celebration on Amazon ever by Bharat! “Manish Tiwary, Amazon India Vice President, said.” During these unprecedented times, we are humbled by how retailers, brands and ecosystem partners nationally have come together just to bring joy around the country. We look forward to assisting their companies to get back on the right path and delivering joy to our customers safely throughout this festive season.

GEIndia’s Mayank Mittal is a Delhi-based local store seller on Amazon.in. He stated, we expected more customers with the Great Indian Festival of Amazon, but never imagined it would progress to an 8X revenue rise. For our electronics company, the experience has been fantastic.

The Great Indian Festival has already been the best day for Samsung Mobiles in India,” said Senior Vice President Asim Warsi of Samsung India. Our latest launches-Samsung Galaxy M51 and Galaxy M31 Prime-have been particularly successful with customers across the nation, recognising their best-in-class features and functionalities.

The new sellers and the introduction of the new products with lots of offers like No cost EMI and discounts boosted the sales of the Great Indian Festival. This makes huge popularity across the country.

For the very first time, the largest number of new customers started shopping on Amazon.in.

91% of new clients from smaller places

In the first 48 hours of GIF, 98.4% customers purchased from various  pin codes

During Prime Early Access, Prime members started shopping more than on any other day,

Passionate In Marketing - December 3, 2020
0
YES Premia has been re-energized by Yes Bank, launching a premium banking program that provides customized solutions focused on the specific requirements of...