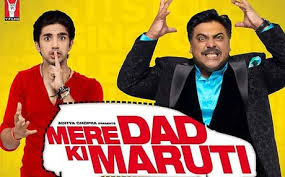 India’s first advertiser funded film has hit the screens and the film recently got a name change from “Mere Dad ki Gaadi” to “Mere Dad ki Maruti”. The Yash Raj production company’s movie gets the honor of being the first film to be funded by an auto player. The total cost of making the film is about Rs. 10 crores out of which a lion’s share was given by Maruti.

Sony TV and Maruti together have clinched the satellite rights for the film and almost 80 per cent of the film making cost is shared by the companies together. The producer of YashRaj films, Aditya Chopra says that he had always dreamt of making an ad-funded film and thereby pitched the idea of the film to major auto players in India. Maruti was the first to accept the offer and thereby the name “Mere Dad ki Maruti” was given to the film.

The film is centered on Maruti’s Ertiga and the company by pooling out the major chunk of the production cost gets a film in its name. Definitely not a bad idea!! The film in its first week of release has fetched a collection of Rs. 4.5 crores and the overall collection until now stands at Rs. 8.12 crores. The collection is a sure indication of the success of the film. The auto brand besides having its name in the movie also plays a major role in the movie. Indeed, Maruti Ertiga  is the centre of attraction in the movie. A scene in the movie portrays a sales person explaining the features of the car.

The company which was looking to do some brand activation for long time tapped it right when it came to the film deal. Whether sales of Ertiga reach a new high or not, audience will never forget the title of the film which has Maruti in its name.

Priyanka Rajan Chirayath - June 12, 2021
0
Since the start of COVID-19, the education sector's digital transformation has accelerated, resulting in a paradigm shift in how technology is used...

Is SIP better or Lump-Sum investment in Mutual Funds?

Sanit, a German sanitaryware firm has been acquired by the Roca...