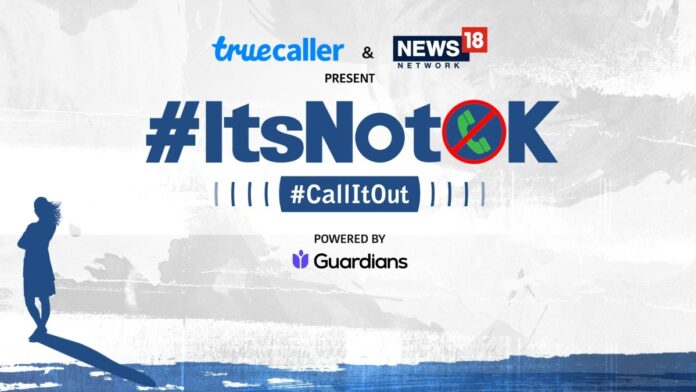 #ItsNotOk campaign culminates with the unveiling of the #CallItOut wall and a Run to EmpowHer in partnership with Delhi Police; engages citizens, policymakers, celebrities, and influencers

New Delhi, August 3: Truecaller & News18 Network culminate their six-month-long #ItsNotOK campaign against harassment of women with the unveiling of the #CallItOut wall & a Run to EmpowHER. The culmination was in partnership with Delhi Police and saw participation from dignitaries such as Bhupender Yadav, Union Minister for Environment, Forest & Climate Change, Rakesh Asthana, Commissioner of Police, Delhi, Mandira Bedi, Sagar Preet Hooda, Special Commissioner For Police (Law & Order), Delhi extending their support towards the need to take action against harassment. Over 500 citizens came together to run for the cause to reclaim safety in digital communications and the real world. The Ministry of Culture has also extended its support to the campaign under the Azadi ka Amrit Mahotsav celebrations.

Unveiling the #CallItOut wall at the Civil Lines Police Station, Rakesh Asthana, Commissioner of Delhi Police lauded the efforts and impact of the #ItsNotOk campaign and cited the law enforcement’s commitment to creating a sense of safety to empower women to call out harassment. Developed by the Delhi Street Art, the mural art signifies stories of brave women who have taken action against harassment and the support of law enforcement towards ensuring safety in both the physical and the more complex world of digital communications. The artwork will further engage citizens across the city as it will be carried and displayed on the rear windscreens of the Delhi Police Emergency Helpline Vehicles.

Following this, the Run to EmpowHER saw elaborate participation from citizens, policymakers, law enforcement, and influencers who came together to express their support for the cause and run on a route designed in the shape of ‘ITS NOT OK’. The run was symbolic of women reclaiming their right to safety in everyday life with the support of Delhi Police personnel and fellow men running by their side highlighting the need for collective action and responsibility towards putting an end to the harassment. The energy and enthusiasm of the run continued as runners shared updates from the event, their personal stories, and their commitment to safety for women across social media platforms spreading more awareness and enlightening the masses.

Speaking at the flag-off of #ItsNotOK Run to EmpowHER, Bhupender Yadav, Union Minister for Environment, Forest & Climate Change said “India is rising as a global power, however, the realization of this power would not be truly complete if women continue to be discriminated against or be subjected to harassment. It is important to realize that we just can’t leave the burden of speaking out and fighting harassment and discrimination in all spheres of life purely on women. Men have to engage as allies in fighting harassment as a basic responsibility of a human being. There has to be an enabling environment for women to be able to freely live, work and just be themselves as humans. The realization of that enabling environment is everyone’s responsibility. The onus of fighting this battle is on each one of us as responsible citizens and not just women facing harassment alone.”

Mandira Bedi, Bollywood Actress who also joined the Run to EmpowHER on Sunday, said: “Every woman has faced harassment of some form in their life. While we have been told to silently endure, ignore or block such incidents, it is important to call it out. There are many ways to call out harassment. There are apps like Truecaller that tell you the number of the person who is calling. My message to women is that they should call out harassment because it’s not okay.”

Commenting on the culmination, Ms. Pragya Misra, Director of Public Affairs, Truecaller, India said, “We are emboldened with the massive support of citizens through their participation in the #ItsNotOk campaign and helping us strengthen our fight against harassment of women. Our goal has always been to bolster the conversation to #CallItOut and create awareness by driving action on the ground. We are confident that the efforts of the initiative will be amplified with these events and will continue to encourage every citizen who will come in contact and engage with the artwork on the #CallItOutWall or the Delhi Police Vehicles. We are grateful to the Delhi Police for championing this fight and partnering with us to ensure that the culmination is a continuation of our resolve for the safety of women in physical and digital communications.”

Sidharth Saini, SVP & Head – Marketing, Content & Operations at Network18 Studio said: “We are really happy and encouraged by the support that this campaign has received from stakeholders in the society, be it policymakers, police, legal authorities, academicians or celebrities. Delighted to have been partners with Truecaller on a purpose-driven campaign that is making conversations happen on real issues.”

Sagar Preet Hooda,  IPS and Special Commissioner of Police (Law & Order), Delhi Police, who also joined the Run to EmpowHER said: “This fight against harassment of women is of all of us as a society. The mural art on the wall of the civil lines police station is a testament to the Delhi Police’s dedication and spirit to fight against this menace. It’s not okay to be silent. In India, our women also face harassment within domestic spaces, not only in public areas. We encourage women to report such cases of harassment. We have created helplines 112 and 181 that help women in immediate emergency situations.”

A woman runner who was on a holiday in Mumbai decided to participate in the EmpowHER run in her own city, said that she ran to instill the right values in her son, and not get self-defense classes for her daughter in the future. Her support for the campaign shows how the initiative has turned into a people’s movement over its journey.