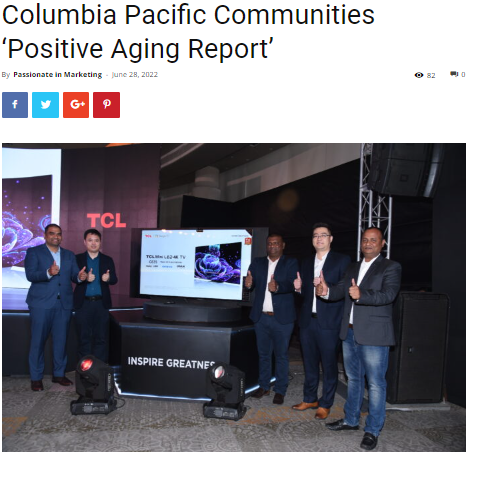 ·         The Positive Aging Report 2021, commissioned by Columbia Pacific Communities, provided crucial insights into the hearts and minds of seniors in India.

·         About 97% of the surveyed seniors believe that technology helps with their mental health and peace in comparison to 82% of millennials and Gen Z and 87% of Gen X.

There are over six million senior citizens on Facebook in India. Through this, not only does the average 60-year-old Indian maintain contact with his or her family, but also with former classmates, instructors, and co-workers. Many seniors are using technology to improve or learn new skills, whether through YouTube or Facebook groups where like-minded people share their knowledge.

The report also indicates that nearly all respondents between the ages of 46 and 60 (97%) and those over 60 (95%) say that technology aids their mental health and peace, compared to 82% of millennials and Gen Z and 87% of Gen X respondents.

Mohit Nirula, Chief Executive Officer of Columbia Pacific Communities, commented on the subject, “It is critical to emphasise the use of social media among older adults and why it has become so important in this current times of physical isolation. Many seniors have joined social networking platforms that enable them to socialise virtually and maintain the much needed connect with their loved ones. Regular technological breakthroughs have not only aided the 60+ generation’s ability to maintain their independence, but also this culture appears to have had a positive effect on seniors who have lived, worked, and aged in cities for years. The seniors are growing more interested in online games and content. E-magazines provide a wealth of knowledge and relevant items to keep senior citizens up to date on technology. Seniors are looking for a variety of services tailored to their needs, as well as a lifestyle that is rich in social, emotional, physical, psychological, and spiritual well-being.”

In addition, compared to only 21% of men, 37% of women ‘strongly agree’ that technology helps with their mental health and tranquility. Even though both genders believe in the benefits of technology, it is safe to conclude that older women are more convinced of the benefits of a tech-enabled lifestyle than men.

The Positive Ageing Report which was released in August 2021, is based on face-to-face and telephonic interviews conducted by Innovative Research Services (India) Pvt. Ltd. Over 2,000 respondents older than 18 from Bengaluru, Delhi, Hyderabad, Mumbai, and Pune participated in the study. The respondents between 18 and 35 years are referred to as Gen Z and millennials, and those between 36 and 45 years as Gen X in the report.

Madhavi Reddy K S S - August 10, 2022
0
“Insurance is something we all know, but it is often ignored. Policy Bazaar is not about providing insurance to consumers. This is an interesting challenge as very few consumers buy....