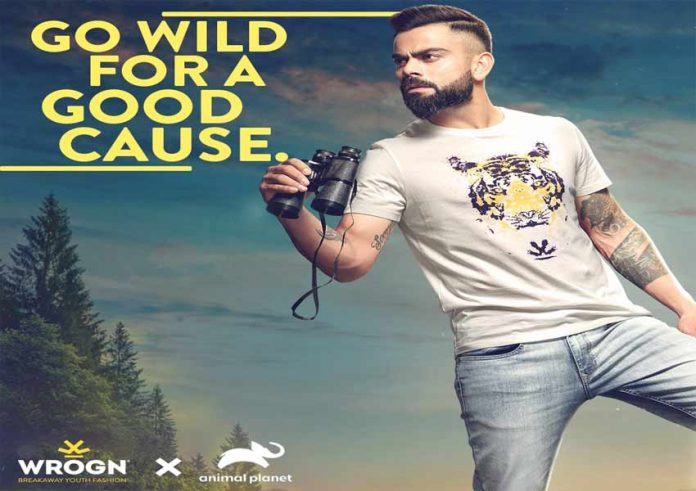 USPL’s clothing line Wrogn collaborates with Animal Planet for a new range of clothing. Underlining the cause of animals, Wrogn focuses to create awareness around endangered species. The company decides to go wild for a good cause. Virat Kohli is the face of Wrogn.

Virat Kohli, the brand ambassador of WROGN, said he has been associated with Wrogn since inception and they take some exciting initiatives every season. He is happy that the brand is taking steps and making efforts towards creating awareness on the issue of endangered species and wildlife as well.

“Animal Planet, through which we see much of the wildlife has been trying hard to bring in and drive customer’s attention towards the significance of saving the endangered species and wildlife in effective ways. We are sure that this new association with the brand for this inspirational wardrobe line will help in spreading the message and awareness of conservation of endangered species as well as the wild living,” tells Megha Tata, the managing director of Discovery, South Asia.

Anjana Reddy, chief executive officer, Universal Sportsbiz, commending on this innovative collaboration said “We like the basis of this association with Animal Planet as it enables people to wear the cause that they feel so strongly about and spread the word at the same time.”

Bhavik Vora, founder, and CEO, Black White Orange Brands, added “We have closely worked with the Animal Planet team for around a year, to visualize the art that you see on the range and it’s incredible to see it come to life”. The Animal Planet X WROGN clothing will now be available in and over 250 countries through retail channels like Pantaloons, Shoppers Stop, Central, WROGN’s exclusive stores, Myntra.com, and on www.Wrogn.in.