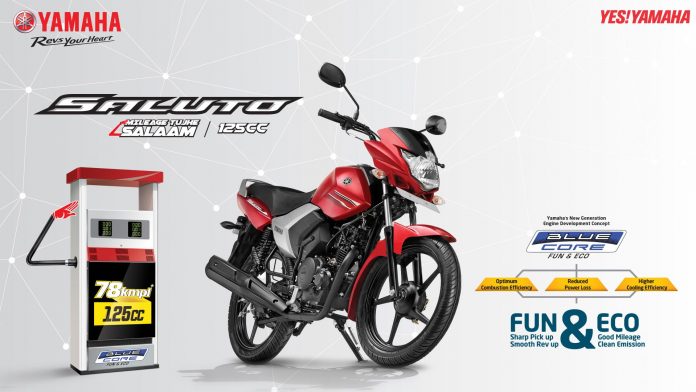 Yamaha Motor India Sales, the two-wheeler giant announced a new variant, Saluto 125 cc bike in the last week. This new model comes with disk brake and it carries a price tag of Rs 54,500 as per the ex-showroom rates in Delhi.

Talking about the new Saluto 125 cc bike, the vehicle gets new looks in terms of both color and sporty graphics. The new Saluto from Yamaha arrives in four new attractive colors such as Dashing White, Glory Green, Majestic Red and Bold Blue. The vehicle will be available at all the authorized Yamaha dealers across the country.

The specifications of the new Yamaha Saluto 125 cc remains and they include the air-cooled four-stroke SOHC and the two valve engine based on the Blue Core Engine Development ideal.

The new 125 cc Saluto is the lightest one in its class weighing at 113 kg. The vehicle boasts of a mileage of 78 kmpl and its disk brake feature helps in providing better control and reliability. The sporty graphics adds to the dynamic styling of the two-wheeler.

Regarding this, Roy Kurian, the Vice President of Sales and Marketing at Yamaha Motor India Sales stated that the new Saluto bike is aimed to provide a safer and more controlled biking experience for the motorists in the city traffic conditions.

This new model is aimed to expand the manufacturer’s sales in the 125 cc two wheeler segment, added the executive. He further stated that the company is bullish about this new offering and that it will help them maintain the strong growth number that were witnessed by the company in the last few years.

He also stated that the Indian Motorcycle market has about 68 percent of the overall two-wheeler market with 11 million units. Of this, the 100 cc to 125 cc motorcycles is the largest with 9 million units that constitutes to 83 percent of the market. The reason for this is the economical nature of the category that includes models with affordable prices and fuel efficiency.