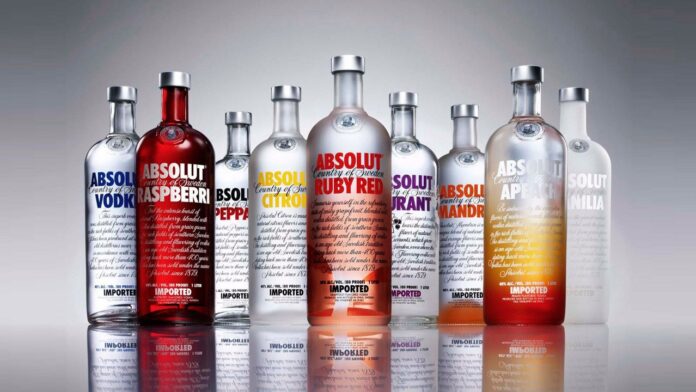 Absolut Vodka declares its new bottle design which shows the largest refresh for the brand since its launch in the USA in 1979.

In honor of Absolut’s credentials provenance, origin, and authenticity, the latest look desires to harmonize and promote the design of the iconic clear glass packaging.

These design updates include:
• Affected by the community encircling its production and distillation in and around Åhus, Sweden, the new bottle comprises changes that nod to the craftsmanship and rigor behind the well-known vodka.

• Bringing to life Absolut Vodka’s ‘One Source’ ideology by entailing text along with an illustration of the actual distillery quoting “ONE SOURCE, ONE COMMUNITY” One small village in the south of Sweden, enhancing the fact that every bottle of Absolut Vodka is manufactured and processed in Åhus, Sweden.

• It’s the first time Absolut has incorporated a paper label on the bottle.

• Improving the legibility of the story, enabling more people to read and admire Absolut Vodka’s story.

• Enhancing Lars Olsson Smith’s name on the medallion, the quality seal of the bottle, giving appreciation to his progressiveness in vodka distillation, enabling him to sustain his inheritance.

• Embossing the glass with ‘COUNTRY OF SWEDEN’, associating back to its long-standing belief and wisdom of vodka making in this nation.

Charl Bassil, Global Vice President, Marketing, Absolut, in an interview about the brand’s new bottle design said that the new look indicates the endeavors they had put into the making of our vodka. They’ve taken a look at themselves and have reached a place where they’ve kept their unique DNA, conveying their provenance, origin, and authenticity more clearly than ever.

New bottles hold the same well-balanced vodka they always have but enjoy the nature and craft that make Absolut Vodka flawless for everything it nices with.

The edits to Absolut Vodka’s new-look bottle mean it has retained its iconic shape motivated by an 18th-century apothecary bottle but renovated its structure.

The new design of Absolut Vodka is developed together with the design agency Brand Union Sthlm and recognized in partnership between Brand Union, Distrito and their glassworks partner Ardagh group.

The new bottles will be accessible in the US from September 2021 onwards and continue to roll out all over the world depending on existing stock supplies.