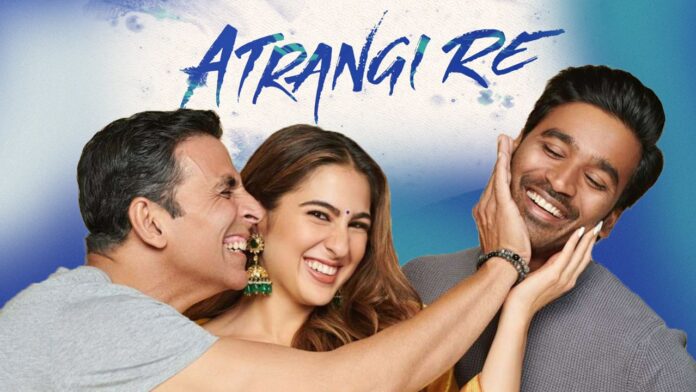 About the movie: Atrangi Re, directed by Aanand L.Rai and starring Dhanush Sara Ali Khan, and Akshay Kumar, which is a musical romantic drama that will make viewers fall in love with the film and is all set to release directly on Disney+Hotstar on 24 December.

This musical romantic drama, set in Bihar and Madurai, revolves around a young confused woman who marries a cunning man Vishnu (Dhanush), and on the other hand, falls in love with a circus ringmaster Anil (Akshay kumar).

On the other hand, the musical soundtrack is composed by A.R.rahman for the second time in the direction of Aanand L Raiafter Raanjhanaa with lyricist Irshad Kamil.

The Director is best known for the Tanu Weds Manu franchise and Shah Rukh Khan-starrer Zero. This will be the Bollywood superstar Akshay Kumar’s second direct-to-OTT release after horror-comedy Laxmi, also on Hotstar, last year.

The actor has recently made a theatrical release of his movie, Sooryavanshi which has made over Rs. 179 crore at last count and is all set to enter into 200 crore club.

On the other hand Dhanush made his debut with Thulluvadho Ilamai, in 2002 directed by his father, Kasthuri Raja. Further, he gained more recognition for Polladhavan in2007 and Yaaradi Nee Mohini  in 2008.

Both of which were acclaimed as commercially successful films. He won a national award as the bestactor for his role as a rooster fight jockey in Aadukalam in 2010.

Other commercial successes along the way have included titles such as 3 (2012), Vadachennai (2018) and Asuran (2019),and many other films. Vada Chennai was emerged as the highest-grossing and A-rated Tamil film of all time, while Asuran has made Rs. 100 crore for which the actor won his second national award earlier this year.

His Bollywood debut was in 2013 with the romantic drama Raanjhanaa alongside Sonam Kapoor and Abhay Deol and directed by Aanand L Rai. He owns a production house, Wunderbar Films, and produced various films. He also made his directorial debut in 2017 with Pa Paandi.