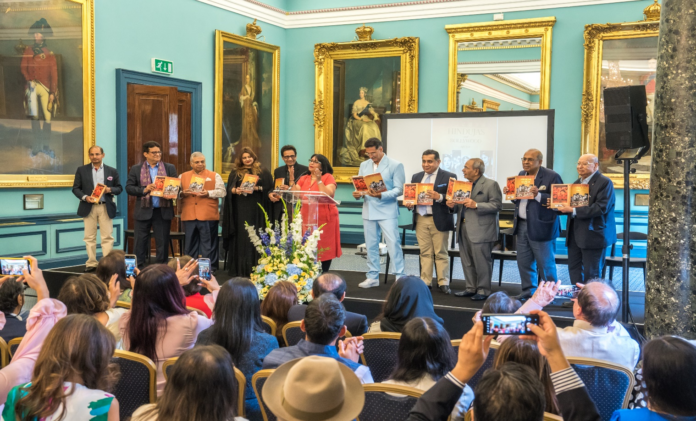 India, 5th July, 2022: At an elegant event in Central London, organised by the Institute of Directors, attended by Lord Tariq Ahmad, British, MoS for Commonwealth and the United Nations, Bollywood superstar, Akshay Kumar unveiled the book “Hindujas and Bollywood” by the noted Indian Film Critic, Ajit Rai. The book captured the yet untold story of what is termed as the Golden Period of Indian Cinema when the Hindujas were major patrons of the Indian movie industry, and the role played by the Hinduja Family in creating an overseas market for the Indian film industry.

The Hinduja Family’s association with the industry dates from the 50s to the 90s, including successful associations with directors Raj Kapoor, Dev Anand etc. The Hinduja Family financed and ran over 1200 films including the iconic ones like Sangam and Shree 420, and in particular a hugely successful partnership with Manmohan Desai, which yielded hits like “Naseeb,” “Coolie,” “Suhaag” and “Mard,” all starring the iconic Amitabh Bachchan.

G P Hinduja, co-chairman of the Hinduja Group of Industries speaking at the book launch said, “There is a lot of potential for co-production in the field of cinema between India and other countries of the world. This book will inspire the new generation of filmmakers and cinema lovers. All the Bollywood films we have financed and distributed, we have never lost money because we work hard to earn money.”

According to the book “Today, Hindi films are doing good business all over the world, but its foundation was laid in 1955 by Hinduja brothers in Iran.  “This journey which started in Iran quickly became famous all over the world.  Today, hardly anyone can believe that about fifty years ago, when Raj Kapoor’s film “Sangam” released in Iran, dubbed in Persian, it ran for three years and for one year in Cairo, the capital of Egypt.

Mehboob Khan’s “Mother India” and Ramesh Sippy’s “Sholay also ran for a year in Iran.  Indian industrialists Hinduja brothers screened around 1200 Hindi films worldwide from 1954-44 to 1984-85 and in this manner “Bollywood” was shaped.

Lord Tariq Ahmad, Minister of State for Foreign and Commonwealth Affairs present at the event, lauded the Hinduja family’s contribution in bringing the Indian diaspora together.

Bollywood superstar, Akshay Kumar chief guest at the event said, “I am very happy making films… As an actor, I do whatever possible to take up social issues. I have produced 150 films, the one nearest to my heart is ‘Raksha Bandhan’.”

Photo Caption: Hinduja brothers along with actor Mr. Akshay Kumar at the book launch of “Hindujas and Bollywood”, held at the Institute of Directors at Pall Mall in central London.