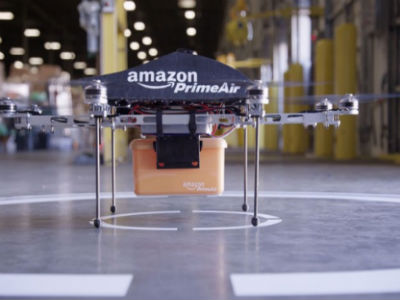 August 20,2014: If a media report is to be believed, this Diwali, cities such asBangaloreand Mumbai will not be drowning with the noise of crackers, but that of drones. Well, an Economic Times report states so as AmazonIndiais reportedly prepping to deliver ordered products by means of drones or UAV (unmanned aerial vehicles) in the aforementioned cities for this festival of lights.

Interestingly, Amazon has not even announced this delivery scheme for US and it will be fortunate Indian consumers to enjoy this service initially. WithIndiabeing the pioneer to enjoy this delivery by drones approach, it shows that the country is gradually developing into a great online shopping behemoth.

According to the report, AmazonIndiawould be investing approximately $2 billion in the country to spread out its operations. Also, with the delivery with drones system, the retailer will be delivering products such as books and mobiles within a time frame of 90 minutes to three hours from the placement of the order.

Amazon will be testing this pilot project in two cities – Mumbai andBangaloreinitially as it is in these two cities that the retailer has fulfillment centers and storage houses.

This plan was revealed by Amazon in late 2013 and it was claimed that it is aiming to deliver goods to the doorsteps of its consumers with a fleet of unmanned drones. This scheme is named ‘Prime Air’ by Amazon and the vehicles will be used to deliver the packages up to 2.3 kg in just 30 minutes provided that the distance from the fulfillment center and the delivery address is within 16 km radius. To serve this purpose, Amazon is developing drones that can fly at speeds of up to 80 km per hour.

However, it is sure that this will not be a cakewalk for any firm as the norms claim that the drones are not allowed to fly above 400 feet altitude and they are banned to fly over security establishments. Hence, getting the security clearances from the concerned authorities in every region will be a major concern for the retailer.

Another factor that can hamper this scheme from Amazon is that the drones are pretty expensive as even the mid-level models are priced around Rs 1,80,000. Consequently, it will be the customers who will have to bear the burden of the delivery cost. Already, consumers are paying about Rs 100 to Rs 150 for same day delivery of the ordered products and this is subjected to increase.