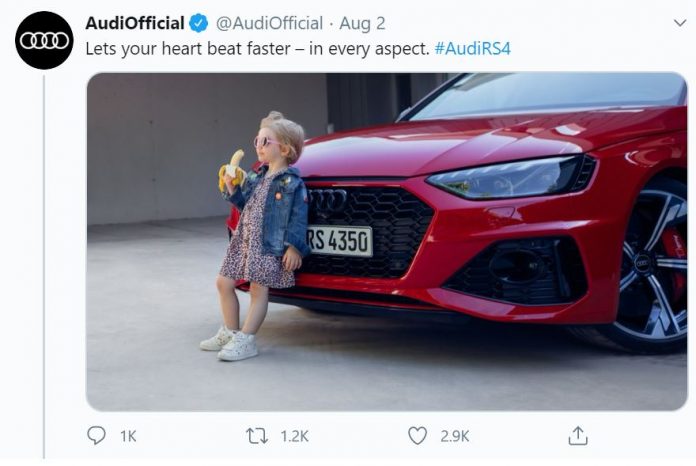 Audi has jerked an ad showcasing a little girl eating a banana in from of its one of the model cars. The ad film was considered as insensitive and suggestive by various public views. The ad which was made from the Germany carmaker that has a slogan,’Let your heart beat faster- in every aspect’.The automobile was being framed as a family car with an emergency braking system. But some issues took critics twitter that turned against the ad film that was been released.

There was a tweet by one person, “So, let your heart beat faster in every aspect? Picture of — the child with a banana in mouth and flash car — so wrong in EVERY aspect,”

Many framed that the ad film has some indirect content that is been showcased. The red car and the girl with a banana in her mouth resemble things that are quite inappropriate. And it is very appreciative that the firm, Audi handled this issue in a very gentle and polite manner. There was a decent retweet that apology for the issue and misunderstandings.

They also added that the notion of creating this ad film was completely different from how it is been portrayed on social media platforms. The aim was to put forth that the vehicle is not just for one man use, but it’s for a complete family.

Every person in this world has their thoughts and opinions. Putting forth those opinions is not wrong but concluding misinterpretation is wrong. And that is what exactly happened in the case. The firm was about to put forth something adequate but that turned against them,

And few people state that people mind has become very sick to understand what’s happening and they need a serious mental health checkup. Especially when it comes to this social media platform, there are always a few people whose main motive is to backstab the growth of the firm.

On a part of resolving this issue, the firm made it straight and stated that they care for children, and also the vehicle is for the comfort of the family. Talking about the Audi RS, the system has better comfort and 30 safety assistance that would include an emergency break and also is purely meant for the family drive. The features of the car give a perfect reply to all the people who have misinterpreted the ad campaign.