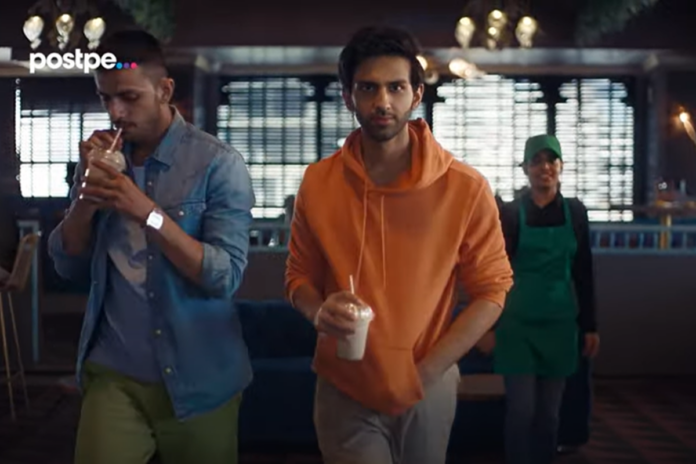 The campaign, themed ‘De Dena Aaram Se,’ is intended to raise awareness about the various use-cases of postpe centred on interoperability and instant approvals.

It also aims to explain to customers why they should buy now and pay later (‘De Dena Aaram Se’).

The 360-degree campaign will run for eight weeks on Entertainment, Sports, and News channels, as well as OTT, Youth Platforms, and Social Media.

The latest film is intended to position postpe as a smarter and more convenient alternative to traditional payment formats such as credit cards.

The film contrasts the lives of two types of people: one who is stuck in his monotonous life and has no idea how to break free, and the other who is living a smarter life with postpe.

The film shows a variety of ways in which postpe improves the protagonist’s life, positioning it as a smarter choice for new-age customers.

The film establishes various USPs of postpe, a BNPL product, by emphasising features such as ’10 lacs in 60 seconds’ and ‘Pay with credit everywhere – QR, Swipe, Pay Online.

“Consumer credit in India is highly underpenetrated and limited to very few categories,” said Parth Joshi, Chief Marketing Officer at BharatPe, at the launch of this new campaign.

As a result, we must evangelise the category and educate consumers on why they should switch to ‘Buy Now Pay Later’ and abandon traditional payment methods such as credit cards.

We launched this film with this goal in mind: to drive category adoption and enable growth for our product.”

In just six months, the product has amassed over 3.6 million downloads, a monthly TPV of INR 370 crores, and loan facilitation of INR 1200 crores.

With the latest campaign, themed ‘De Dena Aaram Se,’ we woven in various postpe use cases to demonstrate the product’s universal usage across QR, POS, and online.

I believe the TVC will resonate with Gen Z and millennials, fueling the growth of postponing and BNPL in India.”

Postpe was built on simple principles that set it apart from the competition, and it puts the power in the hands of the consumer to decide where to spend, how much to spend, and what to spend it on.

Postpe’s most recent campaign was launched in March 2022, around International Women’s Day.

The campaign was designed around the global IWD theme of ‘Break the Bias,’ and it was well-received by the audience, helping to increase brand recall among women.