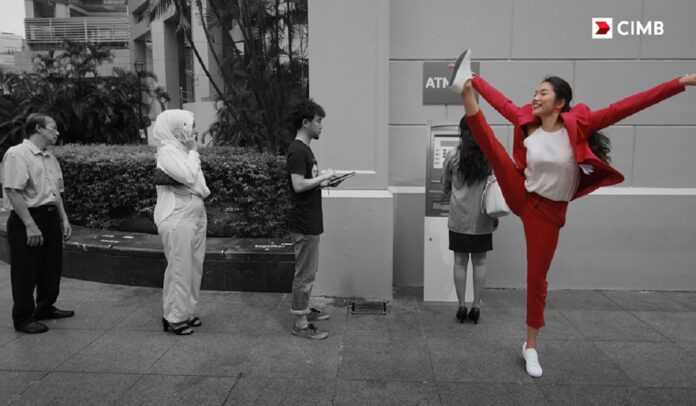 “Break free, bank differently” is the ethos of CIMB’s new brand orientation, which is one of the region’s top banks.

To achieve this, CIMB teamed up with advertising veterans BBDO Singapore, who are known for their long-standing reputation and unconventional thinking.

The agency was tasked with promoting CIMB as more than just a reliable bank, but as one of Singapore’s most favoured financial institutions.BBDO was adamant about making CIMB stand out in a crowded field of banking communications, giving it a competitive advantage without sacrificing the brand’s essential values and services.

To realise the campaign’s objective, BBDO collaborated with BDA on two brand films that were released on January 13, 2022, and were aimed to engage with both prospective and existing customers.

The first brand film’s theme depicts what happens when you break free from wasteful banking habits. It revolves around a cheery CIMB protagonist – clothed in CIMB’s characteristic red hues – who uses the power of CIMB to motivate dissatisfied banking customers.

The film uses a dramatic transition that portrays a burst of life to depict this key consumer epiphany.

Insipid black-and-white sights are washed away by a seeping tide of color á la Wandavision and Pleasantville, and drab circumstances are jolted awake by a vivacious choreography that culminates in a flash mob climax in the heart of Raffles Place.

While the first marketing film is lighthearted and energetic, BBDO wanted the second film to be a change of pace for a different target demographic: CIMB Preferred clients.

On the second film, GuanHin Tay, Chief Creative Officer of BBDO Singapore, says, “The team did a tremendous job encapsulating the concept of “Break free, bank differently” while embracing a more sophisticated and polished approach.

“BBDO has to strike a balance between execution and content creation to cover a wide range of critical issues while offering CIMB a distinctive brand personality that stands out from the crowd.”

The principal protagonist — a character that exists in the same ‘CIMB world’ – lives a premium lifestyle while breaking the fourth wall, practically strolling across frame borders to get from one destination to another, throughout the material.”

In addition to the brand films, BBDO created a number of other deliverables to support the “Break free, bank differently” narrative, which will be released to the public in January 2022.

Passionate in Marketing - May 20, 2022
0
KidZania, a leading brand of edutainment park chain, is bringing forth a series of fun-filled activities and games spanning across the month...