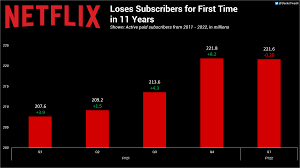 • Netflix is in discussions with a number of businesses about advertising agreements in an effort to counteract its sluggish subscriber growth by launching a more affordable plan with commercials.

Ted Sarandos, co-CEO of Netflix Inc., revealed on Thursday that the streaming giant is in discussions with a number of businesses for advertising partnerships in an effort to counteract sluggish subscriber growth by launching a less expensive plan with adverts.

We won’t be introducing commercials to Netflix as you currently know it, stated Sarandos. For people who say, “Hey, I want a lower price and I’ll watch advertisements,” we’re launching an ad tier.

” It is noteworthy that Netflix declared in April that it was seriously considering advertising after reporting a 2 million decrease in subscriptions for the upcoming quarter and losing subscribers for the first time in ten years.

According to news sources from earlier this week, Netflix has been in contact with NBCUniversal and Google, both of which are owned by Comcast Corp.

When asked which company Netflix was hoping to collaborate with, Sarandos responded at the Cannes Lions conference, “We’re talking to all of them right now,” according to a Reuters story. Additionally, Netflix’s rival Disney, owned by Walt Disney Co.

has said that it will launch an ad-supported tier as the widespread streaming boom fades, the market becomes more competitive, and growing inflation reduces consumer spending on entertainment.

In a related move, Netflix Inc. fired 300 more workers as the streaming juggernaut tries to rein in costs despite uneven membership growth. The corporation will lose jobs overall, with most of the Americans who would be impacted working there.

Compared to the cut the streaming juggernaut made last month, this one is twice as big. The news was initially covered by Variety. “While we still make significant investments in the business, we made these changes to ensure that our costs are rising in step with our slower revenue growth.

“In an email, a Netflix spokesman stated. “We work arduously to support them through this challenging transition, and we are so appreciative of everything they have done for Netflix.

” Following the disruption of its subscription-based business model caused by the cancellation of 200,000 customers in the first quarter of 2022, Netflix is restructuring its operations. According to a Bloomberg story, the problems have battered the company’s stock price and harmed employee morale.

Besides the dismissals in May, In April, as part of reducing its marketing expenditures, Netflix also let rid of some contract employees and editorial personnel from its Tudum website.

A price increase in January contributed to Netflix’s subscriber problems. Additionally, it is up against more competition from streaming services like Amazon.com Inc., Walt Disney Co., and Hulu, all of which have lately reported subscription growth.

India’s biggest minds resolve to end poverty in the country at...