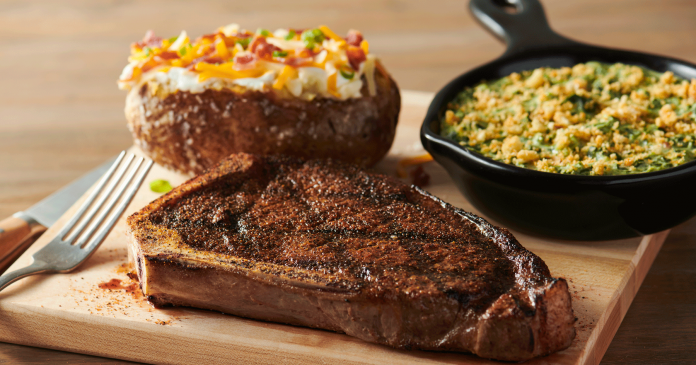 The outdated “manly” attitude used to rule in New York steakhouses like Palm, Smith & Wollensky, and Peter Luger, back in the day, where the headwaiter said, “Got a seven o’clock reservation? So do a lot of people. Go wait at the bar.”

The waiter hardly said, “How do you want your steak cooked?” and this, thank goodness, transformed over the last few years by courteous hospitality that seemed to start somewhere around the time Wolfgang’s Steakhouse opened near Grand Central Terminal.

Spending decades as Luger’s waiter, Wolfgang Zwiener was determined to serve every bit of food as good as any in New York but to eradicate the rudeness and concentrate on good service. And so, he was sensible enough to bring in a large group of experienced waitstaff from Eastern Europe: Albania, Slovenia, Croatia, Montenegrin, etc.

Now, since many of the steakhouses in the city belong to these former waiters, it is not only easy for them to offer the same high-quality seafood, beef, and wine, it is also easy for them to find their regulars and newcomers’ happiness. The case at hand, Tuscany Steakhouse owner, Albanian-native Steve Haxhiaj was a waiter at Wolfgang’s and previous owner of Il Monello with a chef, also a Wolfgang alumni.

The four-year-old dine-in is well-located in midtown, close to Theater District, Carnegie Hall, and Lincoln Center. The dining area has a full-white brick with Roman arches decorated in oak, with incredibly comfy black leather chairs, thick white-washed tablecloths, and a mirrored wall. The room is dimly lit, which deems unusual for a steakhouse, but they can be kind enough to turn up the lights when asked.

The menu emphasizes soups, appetizers, seafood, and meat as a side dish while following a sacrosanct form all over the city. What was very welcoming was one night of zucchini flowers stuffed with ricotta. There is nothing Tuscan about the menu, aside from a couple of pasta. There are 15 different wines, and Haxhiaj chooses them by himself.

With titanic attention to good food and regulars and newcomers alike at Tuscany Steak, why would people want to dine in an ear-splitting steakhouse somewhere else? If you want to be heard, shout, cone your ears to listen to waiters screaming out information, and look annoyed at a host who seems unsettled by groups of people; this won’t happen at Tuscany.