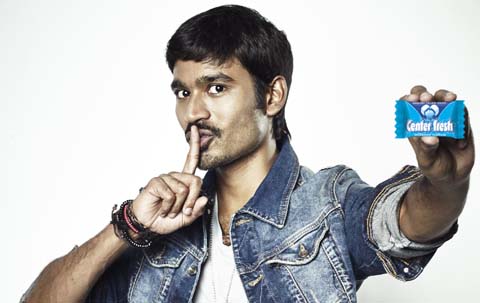 3rd August 2013: Dhanush fresh from his debut in Bollywood and phenomenon success of his movie “Ranjhanna” has been signed by Perfetti Van Melle India as the new brand ambassador of its flagship brand of chewing gum Center Fresh. Center Fresh which is famous for its tagline “Zubaan Pe Rakhe Lagaam” would be using the star power of Dhanush who over the period of time has become a phenomenon not only in South India but also in North India because of his song “Kolaveri Di”.

The new Television Commercial of Center Fresh which features National Award Winner Dhanush would be the actors first brand endorsement in the confectionary category. The new TVC would be run over television, mobile and internet communication. Speaking about the association of Dhanush with brand Center Fresh, Mandar Keskar, Category Head- Gums, Perfetti said “While Dhanush is taking his first steps in Bollywood, in our key markets he is very popular especially among the youth. We are really looking to leverage Dhanush’s equity to help take Center Fresh to the next level”.

Pefetti believes that Dhanush is a good choice for Center Fresh brand and moreover a good value addition since the chewing gum itself stands for Freshness and as Dhanush is a fresh face in Bollywood, it is expected that this would have a positive effect on the brand as well. Perfetti with this move would be expecting a “Kolaveri Di” movement for Center Fresh as with this deal.