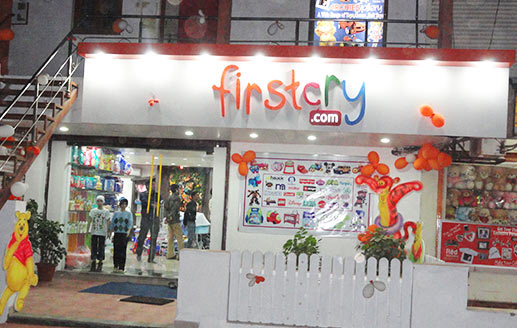 August 7, 2014:E-commerce companies in India have started understanding that merely having a presence in online world is not going to generate business and this has resulted in them rapidly embracing the offline world to boost sales. E-commerce companies like Healthkart which happens to be a health and fitness portal and Zivame, a lingerie site, and Lenskart have already started their offline initiatives to boost sales. Lenskart recently as part of its offline initiative tied up with Optometrists to visit homes of consumers to test their eyes and prescribe glasses. One such E-commerce company which is now fastly embracing the offline world is First cry which started campaigns in tie up with some international brands.

Firstcry which started as an online business now has set up a network of 70 franchisee brick-and mortar stores across 45 cities. This Babycare portal also realised that shopping, especially for recurring purchases like diapers, more often than not is a habit. If the parents are satisfied then there will be repeat purchases. To push the sales of diapers the Firstcry undertook an initiative, where it gifted newborns in over 6,000 hospitals across 18 cities in India with hampers. Each hamper contained diapers and other such goods sold on the site. Supam Maheshwari, founder of Firstcry speaking about this initiative said, “We are able to engage with the customers at the most important point — the birth of their child.”

This campaign met with a huge success and led to new customers on the site. Firstcry as part of this campaign tied up with international brands like Mamy Poko, Libero and Palmer’s free kits. Unicharm and SCA Hygiene Products also provide samples of diapers, baby wipes and lotions, among other things, for the specially designed Firstcry hospital box. The Baby care portal which piloted this initiative in Pune last year now delivers 60,000 packets every month. Speaking about such initiatives from the company’s side, Cecilia Edebo, MD, SCA Hygiene Products India was quoted as saying “For us such initiatives, where we reach out to customers directly, is our number one marketing priority.”

SCA Hygiene’s Edebo claims that this campaign wherein it has tied up with Firstcry is already giving them results. According to Edebo, “We have seen 75% conversion in the form of usage, repurchase and recommendation.” For Firstcry also this campaign is working well and according to the company 25 per cent of new customers come from this program each month and the baby care portal is looking to increase the number of hospital box delivery from 60,000 boxes a month to over one lakh by April.

What is interesting in this campaign is that though brands like Mamy-Poko might be global brands but Indian customers hardly know them. Since the brand partners of Firstcry are not market leaders, they need to create a communication which gives them mileage. The new brands are extensively supporting the campaign of Firstcry since initiative is a fraction of their television advertising budget. According to the available data, the total value of the products provided in the Hospital Box ranges from Rs.500 to Rs.2,000 and the brands bear most of the distribution expenses.