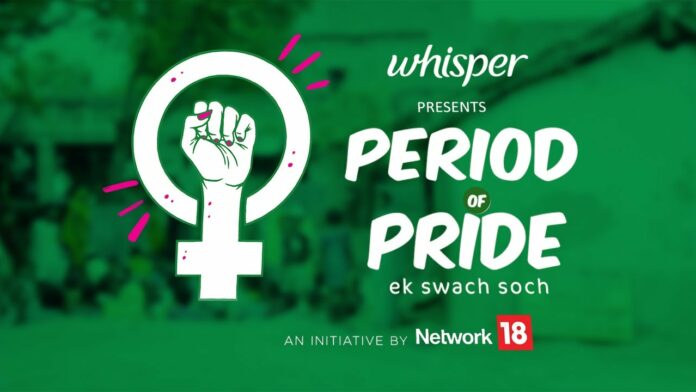 India’s paramount feminine care company Whisper aimed at imparting period awareness and hygiene management along with the nation’s most distinct media conglomerate Network 18 is coming forth with a unique telethon on period a fragment of its 6 months-long campaign called Period of Pride- Ek swach soch.

Campaign ambassador and Actor Bhumi Pednekar would head the 3hour Telethon with various stakeholders and policymakers of the government sharing the table to shed light on period awareness and discuss the petition signed by 1 million people in regards to make period education a mandatory addition to the school curriculum.

The telethon is set to air on 19h September, 3 pm on CNBC-TV 18, CNBC Awaaz, CNN News 18, and their respective social media handles.

Over 6 months the campaign successfully brought women, teachers, mothers, girls from all regions both urban and rural with commendable support from the policymaker’s end.

The discussion aimed at introducing a structured education module in schools to stress on mother-daughter hygiene awareness program bringing forth the members medical fraternity, teachers, students, and key stakeholders.

Elaborating on ‘Period of Pride – Ek Swach Soch’, Avinash Kaul, CEO, Network 18 (Broadcast) and MD, AETN18, said, “It’s 2021 and yet menstruation continues to remain an uncomfortable topic among people, young and old. “We believe that by incorporating period awareness in the school curriculum, we can take a step towards reducing the stigma associated with periods in classrooms.