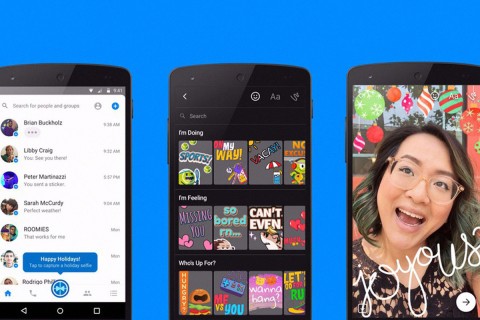 Facebook which rolled out an app update from Tuesday has added more Snapchat like features to its app. The company which says it wants to let the camera “do the talking” has added animations and other interactive filters which would add more life to the dressed up photos. In the latest update, Facebook allows you to tap a new camera icon on the top left corner and with it the phone’s camera opens up for you to do a photo or video post.

According to Facebook users can “expect talent to be utilizing them through the film premiere dates,” which will likely mean film stars using these new features to promote their films.

At a time when more and more people are posting photos and videos instead of text, this added snap chat like feature would definitely have more takers. The Snapchat like feature of Facebook also has a new “stories” tool allows users to post photos and videos and lets it live for 25 hours. This feature which is already available on Instagram and Messenger would help the company be popular among younger users like Snapchat. Snapchat pioneered the first camera sharing and since then Facebook has been trying to copy the Snapchat’s popular features. Another Snapchat like feature is Direct which allows users to share film or video with friends for a limited time.

Movie masks which is seemingly a branded collaboration with Disney, Fox, Lionsgate, Sony, Universal/Illumination and Warner Brothers and will be promoting new feature films is also a new feature introduced in the new update.

It will be rolling out the new feature on iOS and Android over the coming weeks, according to the social media platform.

Facebook has in the mean time tried many times unsuccessfully to buy Snapchat .

Watch this video from Tech Insider to know more: