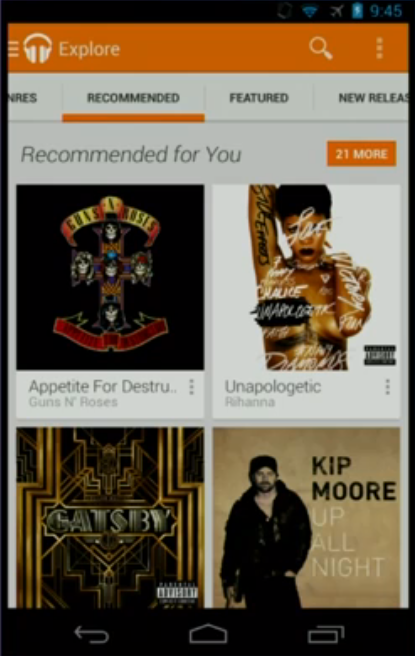 May 16, 2013: Google which has been going strong with its Android operating system has unveiled a new streaming music service called ‘All Access’ for a monthly fee of USD 10. The new ‘All Access’ will allow users to blend their songs with already uploaded song in their online libraries and will give a strong challenge to Pandora and Spotify which are known streaming radio firms. The new streaming music service which has been launched in United States will be rolled out in other countries in the coming days according to Android Engineering Director, Chris Yerga.

Speaking on the occasion of the launch he said, “Anything I am listening to in All Access I can easily turn into a radio station and it allows you to explore radio without rules”. Google with the launch of ‘All Access’ is betting it big since the sales of Android smartphones and tablets have more than doubled to 900 million in the past one year. There has been a sharp increase in the revenue from applications downloaded to Android devices from Google Play store as well. According to Hugo Barra, VP, Android Product Management, 48 billion applications have been downloaded from Play Store and revenue of developers has increased more than 2.5 times in past one year.

What is also interesting to note is that three out of four smartphones sold in the first quarter of 2013 were Googles Android mobile operating system and according to Gartner, more than 156 million Android phones were sold in first three months of 2013 which is 74.4 per cent of the total sales of smartphones across the world. Last year the same stood at 56.9 per cent. Google hopes that all these figures which are in its favour will work for ‘All Access’ as well.

Sanit, a German sanitaryware firm has been acquired by the Roca...

Archa Suseelan - June 12, 2021
0
With the purchase of Sanit, a German producer specializing in sanitaryware installation solutions, the Roca Group, a global leader in the design,...

Case Study: Can we board entrepreneurs instead of actors in advertising?