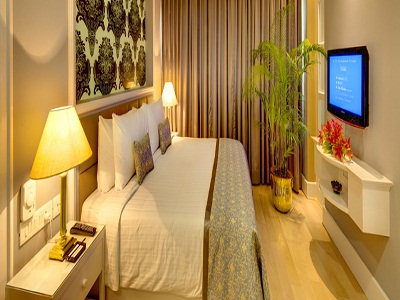 In India, hoteliers are hoping for a slightly better growth this year when compared to the last year. Notably, in 2014 there was sub 60 percent occupancy level in all the major cities and this is believed to get little better with a slight improvement in the room demand.

As per Patu Keswani, Chairman and Managing Director, Lemon Tree Hotels a mid market chain,  the industry is witnessing a 10 percent improvement in the room demand and this is obviously not as positive as the pre-2009 time in the hospitality industry. He added that rates will improve this year, but the growth will be subdued till October 2017 and this is claimed to be the time when the hospitality industry will be afloat again.

The hotel owners and operators claim that the demand and supply mismatch across the major gateway cities in the country contributed to a great slump in hotel occupancies and room rates as well. It is believed that this will continue this year as well though there will be a small pickup in the room demand.

The Chief Operating Officer of Oberoi Hotel group, Vikramjit Oberoi claimed that in the current market scenario, a hotel company can grow by means of acquisitions of businesses as the low demand for rooms is not supportive of an increase in the room prices. He added that a recovery will arrive before 2016.

Hotel chains are bullish on the introduction of electronic visa on arrival scheme that is believed to attract foreigners toIndia. But, there is a slowdown in the leisure business owing to the negative international press on women safety in the country. The average daily rates are constantly suffering as there is an undercutting of prices and almost doubling of inventory in the prime markets such as Mumbai,Delhi, Pune, Chennai andBangalore.

However, operators are constantly insisting on positive signs for the improvement of the hotel business. Hotel Leelaventure Ltd’s Chairman and Managing Director, Vivek Nair claimed that the Leela Palace Chennai was opened last year and it is in the process of getting stabilized and this created an impact on the overall average daily rates for the firm.

Dilip Puri, Managing Director (India) and Regional Vice President (South Asia) at Starwood Hotels & Resorts said that the industry is struggling as there was a swift jump in the number of hotel rooms resulting in demand supply mismatch. He added that there is growth in other parts ofIndiaand that the pressure is not really on occupancy but on rate.