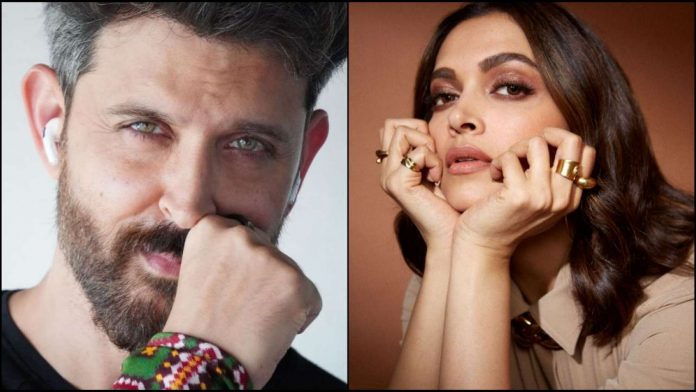 Hrithik Roshan and Deepika Padukone announced the launch of their new film ‘Fighter’ on the occasion of Hrithik Roshan’s 47th birthday. On September 30, 2022, the movie is set to be released. Further, the announcement of Hrithik Roshan and Deepika Padukone have increased the suspense for the fans about the film on the social media platform Twitter. The actress hinted about a double celebration on the 10th of January when Hrithik Roshan wished his co-star Deepika on Twitter on 5th January 2021. Many believe that this new film will be Hrithik’s comeback to the box office after the films like WAR and Super 30 in 2019 that had high earnings.

This film will be the first time the power-duo couple will be featured globally. He has a list of marquee brands in his kitty which are Beardo, a millennial men’s grooming brand; Rado, a super-luxe and ultra-premium watch brand; Free Fire, a first of its kind mobile game; Zebronics, a youth-based mobile and lifestyle accessories brand; Paragon, a super massy men’s footwear brand; and Mountain Dew, the beverage brand which was listed as the best TVC of 2020. Brands will be able to leverage their products, and services with the launch of the film. The Ad industry expert Raghu Bhat who is the founder-director of Scarecrow M&C Saatchi said that the ‘Hrithik Roshan’ brand needs a reboot. He claims that the star has been in the news for several wrong reasons, so the best way to refresh the brand is to start from the basic level of what made the brand successful with powerful stories, and good performance. It was a brilliant idea to use his birthday to announce the launch of the film.

Managing Director, and Co-Founder of Makani Creatives, Sameer Makani said that it is obvious that the brands choose their ambassador since the actor has great success in the box office. Over the years Hrithik Roshan has done a great job in acting which results in dominating the box office with his films. He has established a brand in himself which is a loyal fan base. VP-Creative of Logicserve Digital, Manesh Swamy commented that Hrithik has made a considerable thought to his moves, and ad film selection. In brand endorsement 2020 charts Hrithik has been steadily growing with Whitehat, Tata motors, and Mountain Dew in his kitty.