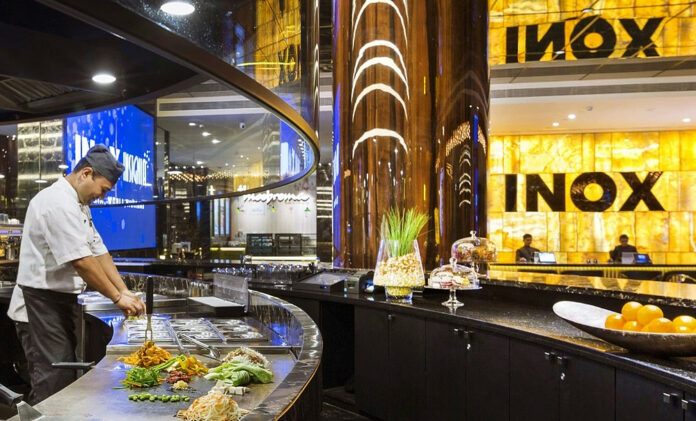 In the hit comedy “Welcome,” Akshay Kumar asked, “Bhaisaab, yeh kis line mein aa gaye aap?” When I saw INOX Cinemas on the Swiggy app, I asked myself the same question. What does a multiplex have to do with a food delivery app?

“INOX will be a gastronomic destination as well as a movie theatre,” says Dinesh Hariharan, vice president of INOX Leisure’s food and beverage division. Food and beverage (F&B) is being positioned as the multiplex chain’s future driving factor, which is not the response I anticipated to hear.

INOX announced a partnership with ITC’s ‘Kitchens of India’ Ready-2-Eat brand of Indian cuisines across all of its multiplexes in India just a few days ago. It also has intentions to position its three food brands Café Unwind, Insignia, and Delights as full-service restaurants to target non-cinema clients, and has listed itself on food ordering apps Swiggy and Zomato.

Hariharan says that the “multiplex industry throughout the world thrives on popcorn and cola,” and that one must develop as people’s demands and preferences change. During Covid, we conducted numerous internal research and interacted with consumers and team members.

According to the vice president, limiting ourselves to popcorn and cola with a few SKUs would not have gotten them where they wanted to go.

“We stated that our thought process should be “From Now Showing to Now Serving.” If I have to switch from exhibiting to serving in India, I need to be able to cover a wider range of cuisines and options,” Hariharan argues.

Inox did not want consumers to have to go to separate food courts, so it began offering pizza, spaghetti, burgers, and sandwiches, but Indian cuisine was not included.

According to Hariharan, many young kids or college students go to the movies on weekdays, and the majority of them do not bring food. Instead of wasting money on snacks, the child can now have a “home meal replacement,” which means he can eat a whole dinner while watching a movie.

INOX’s involvement on Swiggy and Zomato is another intriguing component of its attempt to make food and beverage a leading ingredient.

The idea to position the in-house INOX food brands as restaurants, allowing non-cinema visitors to access them, drew our attention the most.

Insignia has the quality of a five-star hotel. The second is Cafe Unwind, which is like a “Starbucks dominated by beverages and extended discussions,” and the third is the concessions stand, which is like a “QSR where you come in, pick your food, and it’ll be served in two minutes.”

“We sell a lot of cheese and caramel popcorn because our product is better than what’s available in general trade, modern trade, or other food courts,” he claims, adding that they have a fully-trained F&B crew, a battery of chefs, and good experience to open a restaurant.